The desire of leading nations to address the causes of global warming will be tested at the Petersberg Climate Dialogue in Berlin this week.

The annual meeting, hosted by the German government and attended by environment ministers from 35 countries, usually sets the political mood for the main UN climate summit, which this year takes place in Warsaw, Poland.

German Chancellor Angela Merkel will open the talks on Monday morning, amid increasing concern from scientists that the world is on course to break the 2C warming target countries agreed to avoid in 2009.

Levels of carbon dioxide, the most prolific greenhouse gas, are expected to imminently break the 400 parts per million barrier.

In 2007 the Intergovernmental Panel on Climate Change estimated global carbon dioxide concentration should not exceed this level in order to limit global warming to a best estimate of between two and 2.4 degrees above pre-industrial levels. 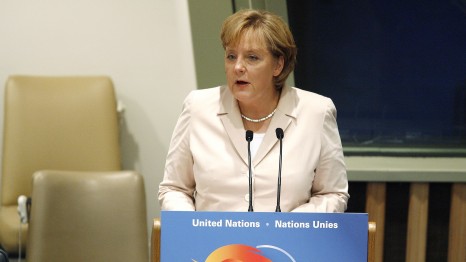 Last week negotiators from 195 countries met in Bonn to start work on a proposed global climate deal that would be agreed in 2015 and come into effect in 2020.

While few tangibles emerged from the talks, observers commented on a new level of engagement from parties – notably China and the USA.

UN climate chief Christiana Figueres told RTCC she wants to see a pathway for a 2015 treaty presented at the Warsaw COP19 summit later this year, and says this week’s Petersberg discussions can ensure this is achieved.

“What would be helpful is to gather what seems to be common ground at least at negotiator level and take it to ministerial level. Is this actually where countries are, can we build on it,” she said.

“It would be helpful for ministers to express themselves and see if they are comfortable and it would allow the June session [of UN talks] to build on that and make progress.

She added: “It has become an agenda setting meeting offering political guidance – this year it’s a little earlier which is good, because early political leadership is crucial.”

Under the heading ‘Shaping the future’ the German hosts have outlined four questions they would like discussed in the coming week:

1. How can we shape an ambitious, effective and fair climate agreement with active participation from all countries by 2015, and implement it from 2020?

2. How can the UN climate process bring about more climate action at national level up to 2020, so that we can remain below the 2°C ceiling?

3. How can international climate policy create effective incentives for more private investment to advance the transformation towards a low-emission economy?

4. How can the climate change conference in Warsaw help us to achieve our main goals, and what are the most important milestones on the path to a new agreement in 2015?

With EU efforts to save the bloc’s emissions trading scheme (ETS) currently floundering, particular attention could focus on whether any new proposals to save it emerge from discussions.

Last week Merkel gave her clearest indication yet that Germany was willing to step in and save the ETS, which has seen emission credit prices tumble since an EU Parliament vote rejected proposed reforms, known as backloading.

“Something also has to be done on backloading, otherwise we have a development that goes in the wrong direction,” she said. “All of the assumptions that are the basis of CO2 trading no longer apply.”

Poland’s hostility to those reforms and wider climate ambition in the EU has been blamed for blocking the adoption of a new European carbon reduction target of 30% by 2020.

“Both the Poles and Germans are not inexperienced in handling uneventful UNFCCC sessions and COPs. But the uncertainty around the low expectations for Warsaw are pretty challenging for a Presidency to communicate,” she told RTCC.

“This vacuum could lead to a risky situation which means Poland becomes the centre of attention as opposed to the outcome.

“This offers some opportunity to shine a spotlight on a government that has consistently pushed back against European climate policy, but could also give them an international platform in which to promote the same views.”

Altmaier and Korolec will compile a political summary of the meeting, enabling the results to feed directly into the UN negotiations.