Poland and France are collaborating on the 2015 global climate deal, according to a spokesperson for Poland’s Environment Minister Marcin Korolec.

Poland will host this year’s talks with France taking the helm in 2015, the round of negotiations during which a deadline to agree a universal emissions reduction deal will fall.

Poland was a controversial choice as host and President of this year’s negotiations, known as COP19. It has opposed moves to strengthen climate action within the EU fearing they could adversely affect its coal-dominated energy supply and economy.

“Our position within the EU is specific to our problems and issues and it will not affect our Presidency,” a spokesperson for Minister Korolec told RTCC. “On the contrary, we know very well a wide spectrum on arguments as regards climate policy. We can be a perfect referee.”

“We are very committed to the outcome of COP19 as well as 20 and 21. We are already co-operating closely with France, hosts of the crucial COP 21 where global deal is to be signed,” they added.

Sources at this week’s UN climate talks in Bonn have indicated that those discussions have not been productive so far.

Korolec will have an opportunity to prove Poland’s good intentions when he co-chairs the Petersberg Dialogue ministerial meeting with Germany this week. 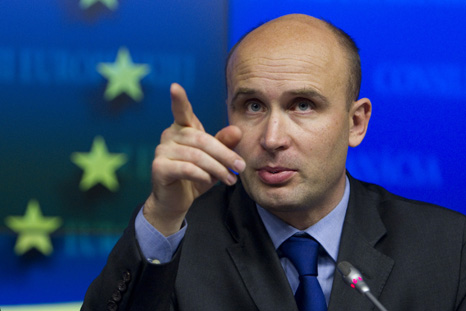 Poland’s Environment Minister Marcin Korolec will act as President of the next round of the UN climate talks (Source: Council of the European Union)

The UN’s end of year climate summit in Warsaw falls at a crucial time in the talks. The new deal must be agreed in 2015 but a draft will be required in 2014.

Warsaw will play a large part in the process of designing the new agreement and the rules that determine how much countries are expected to do.

Seychelles climate change ambassador Ronny Jumeau expressed his disappointment with the selection: “The choice of Poland is not exactly inspiring. Of all the countries it could have been…but that was their choice and we have to live with it,”  he told RTCC.

“They should look at [the last talks in] Doha and how disappointed everyone was with that.”

“Poland no doubt hopes to benefit from the symbolism of hosting the global talks, which they will likely use to give the impression of being positive actors on climate change, whereas their role has been far from helpful in recent years.

“Poland has failed to transpose most of the EU’s climate and energy package to 2020 into national law and has blocked progress on post-2020 policy. It has no strategy for decarbonising its economy and reflexively fights off any scrutiny of its fossil fuels and nuclear energy plans without considering the consequences.

“These facts will not go unnoticed during their presidency, putting Poland in a harsh light, not the limelight,” added Anderson.

Poland’s Environment Ministry insists it could not use it role as host to interfere with the global deal even if it wanted to.

“COP is a party-driven process and any President has limited influence on its outcomes. We want to be an objective COP Presidency, efficient and enabling all parties to be heard. We want to initiate discussions on elements of the global deal to be finalised in France in 2015,” the spokesperson said.

This point of view does not appear to be shared universally within the Polish Government.

“Poland is a coal-dependent country and this will not change soon…This year we will host the climate summit and we hope that we will manage to revert the decarbonisation trend in the EU, which, in our opinion, has gone too far.”

The run-up to the Warsaw talks have been surprisingly smooth with a session in Bonn this week. UN climate chief Christiana Figueres told RTCC’s Ed King that the mood was more progressive than in the past.

“It’s taking place in the context of a positive and constructive tone. Somehow in past years we had discussions on the agenda ‘do we agree that we agreed X, Y Z in the last session’. And that has not been the case here,” she said.

“Nobody is walking back from anything they have agreed in the past – Doha, Durban, Cancun – and everybody came here pulling up their sleeves and saying let’s get to work.”

The past few months have provided more cause for optimism. Egypt sketched out a four year plan to reduce fossil fuel emissions, Indonesia could follow.

Plans to act on the super greenhouse gas family of HFCs received broad support and there could yet be an agreement to tackle aviation emissions this autumn.

There is still plenty of work left on climate finance, the place of adapting to climate impacts in the new deal and finding an equitable way to allocate responsibility.

The Seychelles’ Jumeau said the Bonn session was mainly about assessing positions ahead of a two week UN meeting later in the summer.

“The fangs and the claws will come out in June. It’s clear that the serious conversation hasn’t started yet,” he said.