Rich countries blamed for setting climate talks ‘back a decade’

The UN climate talks have lost a decade of progress because of the failings of rich nations, according to a group of developing countries.

Speaking at the resumption of the UNFCCC process in Bonn on Monday, Naderev Sano, a representative of the Like Minded Developing Countries (LMDC) warned the entire process was at stake.

“There has been a lost decade on climate change. We lost that decade because countries with the responsibility to lead refused to lead,” said Sano, who is also the Philippines climate change commissioner. 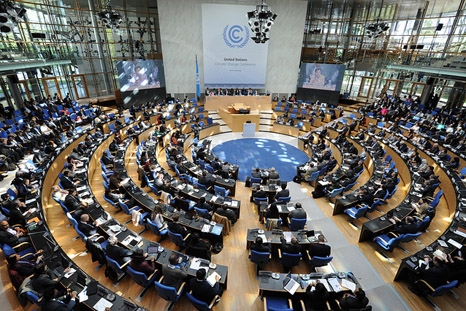 The meeting is being held at the Bonn World Convention Center (Source: Flickr/UNFCCC)

“We lost the last decade because developed countries refused to lead. While they procrastinated, the world experienced the increasing consequences of a changing climate.

“If only developed countries have fulfilled their obligations and remained faithful to our ‘constitution’, we would be on our way to a fair and successful climate regime marked by international cooperation for equitable and ambitious action by all,” he added.

Climate change negotiators are meeting in Bonn this week to discuss the 2015 universal deal to reduce emissions that governments agreed to start work on at the 2011 UN climate summit in Durban.

Unlike the Kyoto Protocol, the new deal would require action from developing and developed nations alike.

“The credibility of developed countries to ask developing countries for bigger efforts on climate action lies on their ability to show leadership,” said Rene Orellana, head of the Bolivian delegation.

“Leadership from developed countries needs to happen now and should not be postponed to 2020, as this sets the stage for more effective climate action beyond 2020.”

The LMDCs include Saudi Arabia, Venezuela, China, India and Ecuador.

The group has no single common thread running through it but is sometimes broadly characterised as countries that oppose the talks’ existing progress.

Some South American members want ambition to be far higher whereas large oil exporters and emerging economies enjoying runaway growth look to avoid promoting policies that could force them into external obligations to reduce emissions that interfere with their economies.