A Tunisian wind energy startup says it is in talks with a number of major industrial players as it looks to move its bladeless wind towers to a commercial scale.

Saphon Energy’s sail inspired towers wobble in the wind, with pistons converting kinetic energy to electricity. It says that by removing blades and gearboxes it can “comfortably” reduce the cost of wind energy by 25%.

Empirical tests it has conducted suggest bladeless wind devices could be 2.3 to 2.5 times more efficient than three-blade turbines, capturing about 60-70% of the wind’s kinetic energy.

“We are in advanced discussions with a couple of companies,” CEO and co-founder Hassine Labaied told RTCC. “We have been overwhelmed with interest from investors and industrial firms. The plan is to remain flexible and consider all the proposals.

“We want to find the right partner so we can take the technology to the next level. The dream is to create a new industry here in Tunisia, to build a logistics and manufacturing centre.” 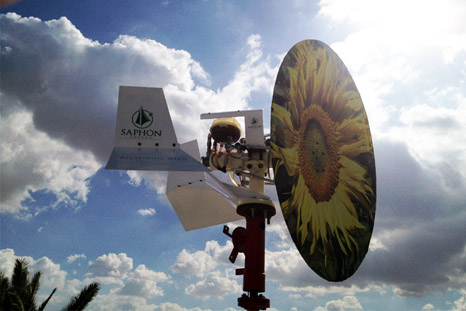 The Saphon device wobbles in a 3D knot shape generating electricity via pistons at the same time (Source: Saphon)

The absence of rotating blades and a gearbox makes the technology possible at any scale says Labaied. The bladeless technology also means less noise, no risk to birdlife and easier installation.

By using the same power-producing pistons to store hydraulic pressure instead of generating electricity, the towers can store energy without needing a battery. The built-up pressure can be released slowly when the wind is not blowing to even-out the supply of power.

As well as hoping to enter the towers into the global utility market, Labaied also sees an opportunity for the company to contribute to energy access in Africa. He believes the lower maintenance towers could help provide energy where there is no grid power available.

The technology was invented by Saphon’s other co-founder Anis Aouini and Lapaied explains what prompted them to start the company from Aouini’s garage.

“Anis and I have been best friends since we were 15. We always shared the dream of one day working on something that was unconventional. He left his engineering job in the oil and gas industry and I left my banking job in Dubai to start out on this venture,” he said.

“We tend to forget how many innovations have started out in people’s garages,” he points out.

With much of the scepticism about the duo’s device melting away, Lapaied is setting his sights on bigger challenges.

“There is a dilemma with growing energy demand, climate change and the need to shift to renewables. For some people this is a choice between affordable polluting energy or expensive clean energy. One day something could come along to provide affordable green energy.

“It sounds too good to be true we hope and we can get ourselves in a position to do that.”