All is not well with the EU’s flagship climate policy instrument.

Last week the European Parliament (EP) rejected a proposal from the European Commission to temporarily bandage up the EU Emissions Trading Scheme (ETS).

A cosmetic proposal known as “backloading” would have done nothing more than temporarily delayed the release of auctioned allowances into the market.

So what’s gone wrong? After a peak in May 2008, the price of an ETS carbon allowances has collapsed – trading today at under €3. This is well below the price necessary to convince companies to invest in low carbon technologies.

Rejection of “backloading” has given rise to much hyperbole about an existential crisis – according to George Monbiot the ETS is apparently already dead!

While the challenges are real, it is often forgotten that the cap will still have effect. Emissions from companies covered by the scheme (45% of emissions from the EU 27, Croatia, Norway, Liechtenstein and Iceland, and Australia from 2018) will be 21% below 2005 levels by 2020 (including use of offsets). 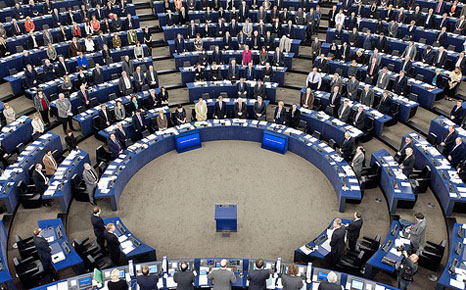 The amendment to block reforms to the EU carbon market was backed by 334 MEPs with 315 against (Pic: EU/Flickr)

Other regions, states and countries have already, or are in the process of establishing trading schemes. Even China is experimenting with emissions trading. In one plausible future scenario, up to half of global emissions could be covered by a global ETS in 2020.

Prices are depressed because of an interplay of fundamental factors, and perhaps also because of a lack of confidence in the system.

Demand for allowances has been deflated by the economic crisis (which has reduced emissions), and the successes of other EU policies (in areas of energy efficiency and renewables). Oversupply of international credits, and unused credits carried over from the 2008–2012 period, are also factors.

According to the European Commission, the number of available allowances will exceed the number of required allowances until about 2023. Whereas an EU-wide carbon tax would continue to work away quietly against the headwinds of economic crisis, the EU ETS seems rigid and exposed.

Backloading the auctioning of allowances until 2019/2020 would have had a negligible real impact. The big problem faced by the EU ETS is that structural reforms are required to reduce covered emissions 80-95% by 2050. The ETS Directive prescribes a linear reduction of 1.74%, which amounts to only a 68% reduction.

As part of the next wave of climate policy the Commission is therefore exploring options for capping further the numbers of allowances. Perhaps the most elegantly, environmentally effective and politically challenging of these is revising the 1.74% annual reduction downwards.

Reform of the ETS is only part of the next wave of EU climate policy, which includes agreeing a target for 2030, with a view to galvanizing movement towards an international agreement by 2015.

The rejection of the superficial “backloading” proposal is therefore not in itself important. But does it have implications for the more radical reforms required in the not so distant future?

Arguments against “backloading” in the EP’s plenary debate circled on the supposedly disastrous economic consequences: the increase in the price of energy; the backdrop of the economic crisis; increasing costs for industry and consumers; and “carbon leakage” of industry.

These arguments are not new, and have previously fallen on a less sympathetic ear in the EP. Have citizens, increasingly squeezed by the economic downturn, reached a tipping point?

For example, German citizens are very positively disposed to responding to climate change, even if it means paying more. But with direct charges alone for renewables adding about 18% to German household electric bills, how far can they be stretched?

EU industry is also feeling the pinch. EU energy policy, combined with the dramatic decline of energy prices in the US (resulting from cheap shale gas) is putting increasing pressure on some.

On the future of the backloading proposal itself, the plenary of the EP decided to send the matter back to committee. The rapporteur and ENVI committee Chair, Matthias Groote, is hopeful that a compromise can be found.

Even if he is right, this proposal was to pave the way for further structural reforms of the ETS, and test the appetite for the next wave of EU climate policy. Rejection is a shot across the bow.

Minds need to be increasingly focused on delivering a far more cost-effective policy mix. That means more Europe, more interconnection, a single energy market, and deploying renewables where they are most cost effective.

Oh, and let’s not forget about energy efficiency!

Joseph Curtin is Senior Research Associate with the Institute of International and European Affairs. He has worked for the OECD, NESC (an advisory body to the Irish Prime Minister), and the Sustainable Energy Authority of Ireland, on climate and energy policy-related issues. This article is based on a blog for the IIEA Environment Nexus project.