Governments will regroup in Bonn on April 29 to start work on the new 2015 global climate treaty.

Recent submissions from the USA, EU, China and India to the UN illustrates some key differences that need to be resolved as the process develops. Failure to bring these four together would be problematic for any universal agreement.

In reality the Doha Gateway agreement made little progress on the new deal with the focus on tying up loose ends from previous negotiating tracks. With those out of the way, attention now turns towards encouraging all nations, rich and poor, to sign up to a new climate treaty, due to come into force in 2020.

The Bonn meeting is billed as a workshop and while it doesn’t have any authority to make formal decisions, it will provide the first glimpse of the direction of the UN climate process for the next three years.

See below for an outline of key positions ahead of next week’s meeting. 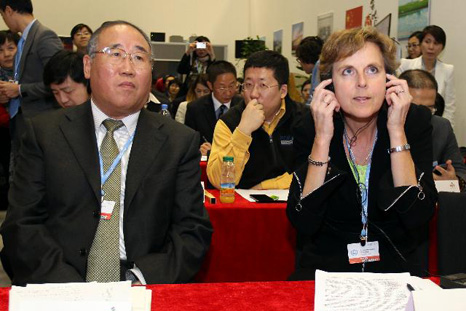 China’s Xie Zhenhua and the EU’s Connie Hedegaard will have to find a compromise on the so-called “rich/poor” firewall (Source: EC)

In focus: US climate change legislation

The USA agreed to start work on the 2015 deal in Durban only after China had blinked first, but there has been a feeling that its reluctance to act is now dissipating.

Its submission to the UN Framework Convention on Climate Change (UNFCCC), which steers the talks, begins with that very point stressing new Secretary of State John Kerry and President Obama’s resolve.

The new deal may put obligations on all countries, rich and poor, but the US is keen for nations to decide the size of their own targets.

This is the only way to ensure all countries take part it says and claims a peer review of pledges could help encourage governments not to set the bar too low (just as peer pressure encourages action at weight loss meetings).

Just as the US opens with a sentiment they will likely repeat furioiusly throughout the talks, so does China.

China’s concern is that the talks will “renegotiate” the Convention, effectively the rule that govern the talks. This is more specifically a reference to the Convention’s classification of nations as either rich or poor which dates back to 1992.

This determines the extent of your climate action and contributions to climate finance. Many countries such as Brazil, Singapore and Qatar have come a long way since 1992 and there is an expectation that what is sometimes called the rich/poor firewall, will be targeted by developing nations. China is determined it will remain.

China’s submission warns that an attempt to reclassify nations “would delay progress”.

China suggests that developed countries should make legally binding cuts to their total emissions while developing nations will sign up to sustainable development based “mitigation actions”.

India repeats China’s call for work on the 2015 deal to be carried out using the same split of developing and developed countries. The legal language of the Durban Platform, the 2015 deal’s official name, states it shall be done “under the convention”.

India starts its submission that under the convention by stressing that means the Convention as it exists now.

The same “mitigation actions” described by China are backed by India, but India says these should be funded by financial and technical support from developed nations.

It also take a shot at the EU’s attempt to enforce its regional carbon trading mechanism on international airlines. The submissions says countries should be discouraged “from taking unilateral trade and other measures in the garb of climate protection”.

EU
The EU lists three priorities for the ADP workshop, the second of which immediately looks to reassess how the Convention is applied.

The rich/poor split, or as it is more delicately presented “the application of the priniciples of the Convention” is immediately identified as an issue for attention.

The ADP describes “a protocol, another legal instrument or an agreed outcome with legal force” as its end result. The EU wants the first of these stressing that this is the best way for governments to clarify the strength of their commitment to climate change.

It also reminds other countries that keeping the world below 2C of warming also creates economic opportunities but without firm promises to cut emissions, the private sector will lack the clarity it craves which could deter it from investing in the low carbon economy.