After limited access to the most recent board meeting of the UN’s $100bn Green Climate Fund, there is a danger it could become ineffective and lose trust. Transparency International’s Alice Harrison explains why it is crucial that the fund’s design does not happen behind closed doors.

The World Bank is a leading heavyweight in development investment, presiding over US$30 – $40 billion per year. Inaugurated last summer, the Green Climate Fund (GCF) could soon dwarf that portfolio.

It is estimated that by 2020 it will be channelling US$100 billion a year in climate finance to developing countries – to help arrest the advance of climate change whilst adjusting to its effects.

At the fund’s third meeting, held here in Berlin last month, we watched on as country representatives debated how to reconcile the enormity of their task with the imperative to act fast.

The 24 men and women at the GCF’s helm could emerge as a new brand of world leaders.

They are not democratically elected, yet will be managing vast sums of public money, destined for projects that will in some way or other affect all of us. The degree to which they get it right will hinge on three key principles – consultation, transparency and accountability.

Where is funding needed most urgently? Which technologies will best meet the task? Who should be involved? Answering such questions implies a very big conversation, spanning continents and disciplines. 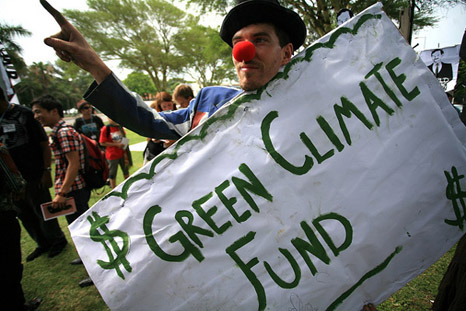 The Green Climate Fund was the focus of many protests at the 2011 UN climate talks in Durban (Source: Flickr/FoE Int.)

It will also require seeking out communities whose homes are being swallowed by rising waters, battered by storms or encroached on by drought. Ensuing decisions on how and where to invest must be open to scrutiny, and backed up with solid justifications.

The fund’s board knows this.

“We can’t underestimate the importance of being at the cutting edge of transparency,” the Australian board member asserted. “We need to hear other voices, not just those of state actors,” was the view from Zambia. “We have to be accountable to our taxpayers,” said their counterpart from Japan. And “receptive to the world of ideas,” stressed the representative from India.

So how are these principles working in practice?

The March board meeting took place at Germany’s Foreign Office, a tightly guarded building with a strict door policy – UNFCCC-accredited organisations only.

Present were the board, their alternates and advisers, and four additional participants – two so-called active observers representing civil society – one from developing countries and developed countries respectively – and two from the private sector.

These four observers are supposed to speak for ‘the world of ideas’, by consulting in advance of meetings, offering input at the end of each agenda item, and then reporting back to their constituencies.

Active observers – each acting in the name of half of the world’s citizenry – received key official documents a day or two in advance. Others had been leaked – but only to a limited group of people – and some were presented mid-way through the meeting.

Here camera phones were used to capture material and email it to we non-active observers, seated in an adjacent room and watching proceedings via an in-house video link. Lengthy discussions ensued over Skype chat – do we have a position on this? What should we say? Is that broadly representative, do you think?

Meaningful consultation requires time and resources. Active observers in Berlin had neither.

They were self-funded, and for the most part several paces behind the board’s deliberations, with little scope to prepare or react accordingly.

The GCF is crafting its own identity, which is oscillating somewhere between a UN rights-based model and a closed banking outfit. A number of pending decisions could sway the difference either way – whether board meetings will be webcast, which information will be made publicly available and when, and how citizen input will be collected and managed.

Transparency must not be propagated as a hurdle to efficiency, or a bureaucratic nuisance.

Involving citizens in decisions about climate investment keeps duty-bearers grounded in real needs, which risk getting obscured by limited political or business interests.

Transparency garners crucial feedback on which projects or financing models work, which don’t and why, and establishes networks of watchdogs responsible for ensuring that policy-making and spending is effective, and not undermined by corruption or mismanagement.

Crucially, public participation also helps build the trust that is needed to tackle climate change – these are the most cross-cutting and global issues of our time.

The board’s calls for transparency and accountability are not disingenuous. In Berlin several members held briefings with observers, demonstrating an openness to engage on a number of issues.

The task facing them now is to enshrine such openness in the fund’s institutional design – in structures and systems to facilitate, absorb and respond to citizen input.

Presently, clearer assurances are needed that the fund will fulfill its stated mandate to “operate in a transparent and accountable manner guided by efficiency and effectiveness”. It will take strong leadership and commitment to make that happen.