By Suzanne Goldenberg, US environment correspondent, The Guardian

But it still came as a surprise to hear Oliver lash out at one of America’s pre-eminent scientists, climatologist James Hansen, during a visit to Washington DC.

Oliver was in Washington on one of the now-frequent visits by Canadian politicians to try to build support for the pipeline.

The charm offensive evidently did not apply to Hansen. In remarks made at a Washington thinktank, Oliver said Hansen should be “ashamed” of his opposition to the Keystone XL pipeline, and for warning that exploitation of the carbon-heavy tar sands would drive climate change past a point of no return. 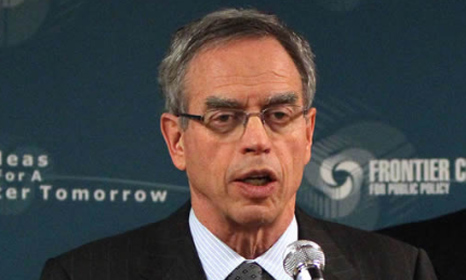 Hansen is known as the scientist who raised public awareness of climate change 25 years ago with his testimony to Congress.

In Oliver’s view, however, the scientist has had no business to keep speaking out as he has. “He was the one who said four years ago that if we go ahead with development of the oil sands it’s game over for the planet,” Oliver told the audience at the Centre for Strategic and International Studies. “Well, this is exaggerated rhetoric. It’s frankly nonsense. I don’t know why he said it but he should be ashamed of having said it.”

It’s not clear why Oliver was so vehement. The minister launched his attack on Hansen just 48 hours after a report from the Environmental Protection Agency essentially reaffirmed the climate scientist’s concerns about the development of the tar sands.

The EPA said developing the tar sands would indeed have a negative impact on the environment, releasing as much as an additional 935m metric tonnes of greenhouse gas emissions into the atmosphere over the next 50 years.

But Oliver has made a name for himself in the past by his efforts to take down critics of Alberta’s tar sands. He wrote an open letter last year denouncing such critics as “radicals” in the pay of foreign special interest groups.

The ministerial outspokenness this week during an interview in Montreal also raised questions about whether Oliver even believes climate change is happening.

If Oliver’s belief in climate science is waning, however, the minister suggested that Hansen was also to blame. “Crying wolf all the time does not advance serious debate,” he said.