If the weather turns cold humans put on extra clothes while birds build a bigger, snugger nest to keep them warm while incubating their eggs.

But birds have to sit on their eggs for two weeks or more to hatch them and can be caught out by rapidly changing weather conditions, badly affecting their breeding success, scientists have discovered.

Researchers at the University of Lincoln in the east of England believe that climate change, with its unpredictable weather patterns, poses a serious risk for birds during this critical period. The incubating eggs have to be kept at a constant temperature if the chicks are to develop and hatch successfully. 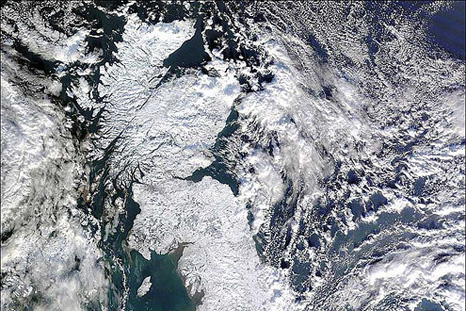 Unpredictable British winters are proving to be as much as a challenge as extreme low temperatures (Source: Flickr/dougbelshaw)

Dr Charles Deeming, senior lecturer at the University, writing in the April edition of the Society of Biology’s magazine, The Biologist, has been studying the construction of the nests of blue and great tits in nest boxes on the campus at Riseholme Park.

Individual birds built completely different nests each year depending on the weather at the time of construction. In a cold spell the nest was much heavier and lined with moss or sheep’s wool, while in warm weather a light and poorly-insulated nest was regarded as adequate. The first egg was laid as soon as the nest was complete.

“Over the last few years scientific interest in nests has increased, with studies ranging from nest composition, construction behaviour and thermal properties, to the use of nests as potential signals to mates,” Dr. Deeming says. He came to the conclusion that the function of the extra lining was to keep the tiny birds warm while they were incubating their eggs.

The problem is the unexpected

The problem for the birds is that in Britain the spring weather has been particularly unpredictable in the last two years. In both 2011 and 2012 early spells of warm weather were followed by much lower temperatures. The result on the Riseholme campus was a devastating effect on reproductive success.

While the blue and great tits use a variety of materials for nest construction, some species rely on particular plants to line their breeding quarters. Dr. Deeming says that if climate change causes these plants to become extinct locally it could affect the birds’ breeding success, and he concludes that more study is needed to find out how local climate can affect nest construction and so reproductive success.

Dr Mark Downs, chief executive of the Society of Biology, said: “Climate change will have a large effect on our ecosystems and food production, and Dr Deeming’s research is one of many studies demonstrating that the effects will be complex and difficult to predict. It is essential that we continue to study how organisms adapt to climate change and how we can best mitigate its effects.”