The fate of Europe’s struggling carbon market could be decided by a second vote on proposed reforms, according to the EU’s top climate officials.

Speaking at a meeting of Environment Ministers hosted by the Irish Government, holders of the revolving presidency, Ireland’s Environment Minister Phil Hogan said it was time for people to decide if they wanted the Emissions Trading Scheme (ETS) or not.

“We’re very anxious to get an agreement. We’re either going to have an ETS or not,” he said.

After rejecting a plan to withhold 900m carbon credits from the market in an effort to lift the price, the reforms have been sent to the European Parliament’s Environment Committee for refinement.

A new plan will be sent back to Parliament for a vote, potentially as early as June. It would then be passed on to the European Council, made up of its 27 member governments, for final approval. 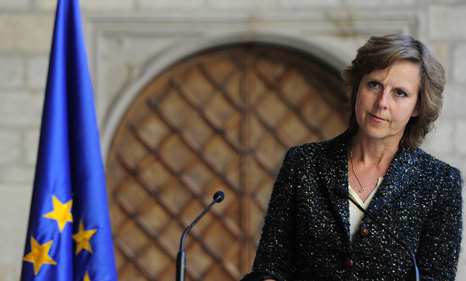 EU climate action commissioner Connie Hedegaard says it will be difficult to make it past a second failed backloading vote (Source: EC)

“If we’re interested in having an ETS system, and it’s certainly under pressure at the moment, we need some proposals we can get agreement on, otherwise we are into a regulatory approach,” said Hogan.

“The alternative, a new regulatory regime has not yet concentrated the minds of some Council members and some MEPs.”

Climate action commissioner Connie Hedegaard warned against the prospect of moving away from a uniform carbon market across the member states to a regime led by domestic laws.

“You can have a vote once that doesn’t deliver the result, but when it comes to the next one, you really have to be sure you get what you want,” she said.

“It seems everybody wants a strong ETS, that’s not what the debate is about. The alternative is a patchwork of 27 regulatory frameworks. That benefits no one.”

Tomas Wyns, director of the Center for Clean Air Policy-Europe (CCAP) told RTCC is was widely accepted the next vote would be crucial – and perhaps final.

“If the next vote turns out negative the short term solution to stabilise the carbon price will be quite a way off. It’s not just the vote it’s whether the Council can support it relatively quickly, and there are questions about the positions of Spain and Germany,” he said.

The verdict of MEPs could be even closer to call but Wyns sees momentum swinging towards support of the plan. The first vote’s result saw 334 against the so-called backloading of emission allowances from the next phase of the carbon market and 315 against.

“You could also expect the negative fallout in the press after the first vote and the fact that the Parliament has been seen as killing off an instrument, changing more MEPs’ positions,” said Wyns.

That majority is likely to be smaller given the bizarre news reported on PointCarbon that a dozen MEPs accidentally voted the wrong way.

Minister Hogan says “behind the scenes activity” is underway to find a compromise agreement to put to the Parliament and the Council.

And he said a working group made up of member states would convene in May to discuss backloading.

The environment committee will discuss potential compromises this week that could smooth the edges of the reforms to ensure its passage through Parliament and subsequent approval by the council.

Hedegaard said the original plans “were not drawn up out of the blue” but that the European Commission was doing what it could to save the ETS.

“Politics does not always move forward as quickly as you would like to see,” she lamented.