Fossil fuel subsidies cost governments $523bn a year, but despite a growing consensus that they should be reformed, they linger on.

Earlier this month Egypt walked away from negotiations on a $4.8bn lifeline loan from the International Monetary Fund (IMF), despite its parlous financial situation.

The loan would have helped leverage $15bn in foreign investment, sending a signal that the country was a good place to invest again after two years of political upheaval that has drained the country’s coffers.

Talks are expected to resume, but one of the main stumbling blocks was a condition that fossil fuel subsidies would be cut.

Given the choice of the timely loan or maintaining the status quo with its subsidy regime, Mohamed Morsi’s government chose the latter given their was no political consensus possible around cuts.

Removing the world’s fossil fuel subsidies has become a high profile issue for NGO’s as well as the EU, G20, the World Bank and the IMF. Campaigners say subsidies line the pockets of big oil companies, supporters claim they are vital to give the world’s poorest access to energy. 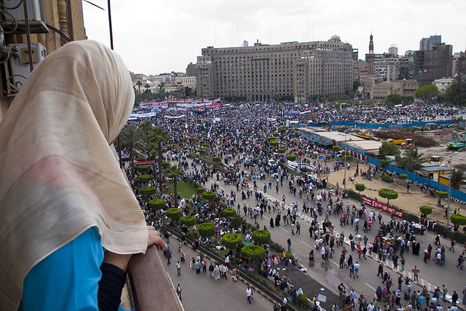 Tahir Square in Cairo during the uprising, which observers say was fuelled by “economic grievances” (Source: Flickr/James_P)

Governments largely accept there are economic and climate benefits of bringing fossil fuel prices back up to market value. So why the hesitation to cut such costly policies even when a desperately needed cash injection is at stake?

The Overseas Development Institute (ODI) says Egypt pays out $19bn in fossil fuel subsidies every year, just less than 10% of its GDP.

The main reticence in Egypt is the effect the cut would have on the country’s poorest. This concern is justified.

Subsidies make kerosene and diesel affordable to the world’s poorest people where lamps and generators fill the void left by the absence of an electricity grid and motorbikes take the place of public transport.

“The uprising of 2011 was partly fuelled by economic grievances. Bearing in mind today’s economic and political turmoil, slashing subsidies overnight would be a risky endeavour to say the least,” Hoda Baraka, from Greenpeace’s Arab World Project told RTCC.

“The poverty rate in Egypt climbed from 21% in 2009 to 25% in 2011. Another 20% of the population lives near the poverty line. Looking at these numbers it becomes clear how integral subsidies are for Egypt’s poorest.”

An overnight cut in subsidies in Nigeria sparked riots in 2012, an event often cited as a reason that subsides must remain in developing countries.

Not every analyst agrees: “The time to reform subsidies is never now, it’s always a case of next year is better for whatever reason. Politics, elections, the economy, there’s always a reason not to do it now,” says Peter Wooders, a senior economist with the International Institute for Sustainable Development’s (IISD) Global Subsidies Initiative (GSI).

“A price rise on its own, without a package to deal with adverse impacts means the chances of it being successful, and sticking, are much lower. If you look at a country like Egypt or at Tunisia, the amount of money they are spending on subsidies is fiscally unsustainable.

“Politically though, it’s an awful time for them to sell prices reforms that would increase prices for people that are poor and vulnerable. People who already see their economic opportunities going down. Holding fossil fuel prices low for the entire population is an incredibly inefficient way to get subsidies to poor people.”

He says a more targeted approach is required. For example, gasoline and diesel are more likely to be used by the middle classes than kerosene. So starting reforms for gasoline first can help protect the poor.

On the other side of the Gulf in Iran, the ODI’s Shelagh Whitley points to a more radical approach that was taken, protecting citizens from price hikes and incentivising lower fossil fuel use.

“Prices increased by 200% but they redirected the saved money to 80% of the population. They literally set up bank accounts for those people and transferred the money directly to them,” she says.

“They can use that money to pay for the higher cost of gas, or they can pocket the money and take the bus. You need to redirect the back to the population but you can do that in ways that send the right signals on energy use as well.”

A major difference between the Iranian and Nigerian approaches was information. The Iranian government informed citizens of the price increases and explained how and when the money would be returned. Nigeria’s did not.

If it is possible for governments to cut emissions and costs, why don’t more governments follow this track, especially given the encouragement from the G20, World Bank and other groups representing around 53 governments?

Wooders warns that while this international support is welcome, subsidies are very much an issue for national governments: “In any country in the world you can bet that finance ministries are worried about fossil fuel subsidies,” he says.

“The scale is one issue. If the market price goes the wrong way then those subsides get much bigger very quickly. There are some concerns about short term shocks to the economy and inflation, but every study show the mid to long term reform is good for the country.

“If you change energy pricing, you are effectively changing the distribution of wealth within that country. There’s winners and losers. If those losers include the poorest, or specific industries such as fishing, agriculture, freight, then there could be groups with political power that can block reforms. The classic example is truck drivers in India.”

Protests by drivers in India in 2008 over fuel prices have been repeated in Bolivia, Nepal and Jordan, a potent reason why governments might be prepared to foot the bill rather than risk losing support.

This has been cited as one reason why weak and nervous governments raised consumer fossil subsidies in part of the Middle East in response to the Arab Spring.

Wooders says there are also corrupt elements to contend with – they take subsidised fuel out of the supply chain and sell it on at inflated prices.

The benefits of subsidy reform are not just economic. They can help incentivise emissions reductions and also free up cash for renewable energy projects and help buffer countries from price spikes. A surge in oil prices can mean a surge in the cost of those subsidies.

Baraka says the Egyptian government has taken this on board, and recently set a 20% renewable energy target by 2020 in response.

“There have been suggestions for the establishment of a renewable-energy fund, which could be a good start. Its implementation and the way in which it will be funded, however, would need to be clarified. A strong strategic vision, backed by empowered institutions, legislation and incentives would be needed,” she says.

With huge solar and wind potential largely untapped, Egypt has perhaps has a more obvious path away from fossil fuels than others. The challenge for the government, like many others around the world, is to find a way that doesn’t alienate the poorest, disadvantage industry or send residents back into fuel poverty.

Producer subsidies are given to big oil companies to encourage exploration and operations. They frequently come in the form of tax breaks. The technical definition of a  subsidy is not a cash handout however  just any preferential treatment. Industry says the figures involved are dwarfed by what they contribute in taxes, however, with profits often making the making subsidies look small, the case for their continuation can be hard to prove.