In 2010 a third of the development bank’s $12bn energy budget was invested in fossil fuel power plants raising concerns about its commitment to climate action.

And despite leading a new drive to address climate change, Kim told a briefing with bloggers and journalists on Tuesday this must be balanced with development where access to energy can be crucial.

He said he has instructed the bank’s employees to look for alternatives to coal but that it had to be realistic about the cost of using renewable energy to meet the needs of poorer nations – citing the funding of a new coal power plant in Kosovo.

“From my perspective, the climate change and the coal issue is one thing, but the humanitarian issue is another, and we cannot turn our backs on the people of Kosovo who face freezing to death if we don’t move in,” he explained.

“We would certainly love to be able to move in the direction of having all of our investments go into renewable energy, but as I said, we’ve got to face this issue of people needing energy,” said Kim. 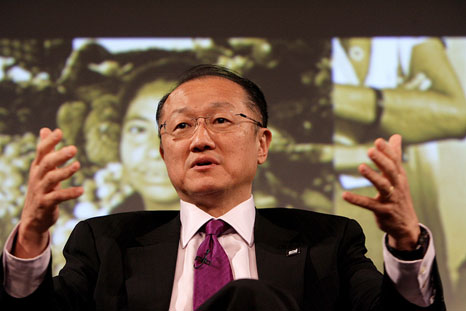 “I have to at once be very practical, but on the other hand, as someone trained in science, I have to be as aggressive as I can be in trying to notch every single win we can in the pursuit of tackling the problem of climate change.

“In places like Kosovo, and there, thankfully, aren’t very many of them around the world, we may end up having to make investments that I have to tell you, on a personal level, I’d prefer not to do.”

Kim said that given the relatively tiny emissions from the Kosovo plant compared to the surge in coal demand in countries such as China, it felt investing in the project was the right thing to do. He added that they were ensuring the plant is efficient and that if it was built without the World Bank’s involvement, it would almost certainly be far dirtier.

The International Energy Association (IEA) warned yesterday that two-thirds of the world’s proven fossil fuel reserves must stay in the ground if we are to avoid dangerous climate change.

Kim says he has instructed staff at the bank to “be as aggressive as possible” in looking for sustainable energy alternatives in each proposed project but in some cases, they must accept that the cost is prohibitive.

“I’ve asked them to…look at every single possibility. Most options for going to sustainable energy would require massive infusions of cash. I mean, it’s a very expensive proposition to move from the coal they have to renewable sources,” Kim said.

The World Bank published the report Turn Down the Heat: Why a 4°C Warmer World Must be Avoided prior to the UN climate negotiations in Doha last year. The 4°C scenario used in the study is based on business as usual, intensive, fossil use.

A report commissioned by Greenpeace this year found that the exploitation of 14 large fossil fuel projects would be sufficient to trigger 6°C of warming.

Coal emissions are growing as emerging economies such as India and China look to feed their growing energy demand. China now burns 4bn tons a year.