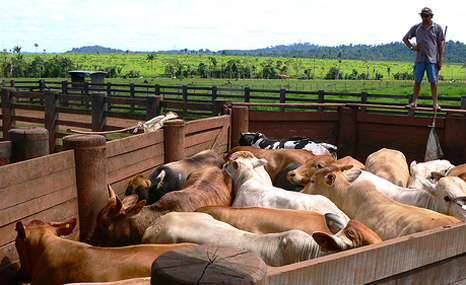 70% of formerly forested land in the Amazon is now used for livestock – in particular cattle ranching (Pic: Jai Mansson/Flickr)

Beef and soya products from Brazil accounted for a third of carbon emissions associated with deforestation between 1990-2010, scientists say.

They warn that the UN’s Reducing Emissions from Deforestation and Forest Degradation (REDD+) initiative and bilateral programmes aimed at preserving the Amazon could be helpless in the face of rising demand for two of the country’s major exports.

The study, published in Environmental Research Letters, calls for a greater focus on the role international consumption plays in driving land degradation, combined with domestic incentives to promote forest protection.

“With increasing global pressure on Brazilian agriculture to increase production, desire for continued economic growth, and emerging changes to the Brazilian Forest Code, it appears unlikely that Brazilian deforestation rates will continue to decrease at the current rate without strengthening measures to protect forests,” the report reads.

It says that of the 30% of Brazil’s carbon emissions linked to deforestation in the past two decades, 29% were due to soybean production and 71% cattle ranching. 15% of global CO2 emissions since 1990 are linked with land-use change.

According to Reuters beef exports from Brazil rose 25% in the first quarter of 2013. Sales to Russia, Hong Kong, Venezuela, Chile, Egypt and Europe accounted for 60% of exports in the period, generating US$1.44 billion in profits.

Soya is an even bigger success story – Bloomberg reports this year’s harvest of 83.5 million tonnes could make Brazil the world’s biggest producer, surpassing the USA for the first time.

But to sustain or increase the current level of production and exports, the report’s authors say Brazil will need to either intensify agricultural production or use more land.

One of them – Glen Peters – told RTCC the situation was alarming: “Deforestation emission levels are trending downwards, but there’s a constant risk there, particularly when you look at the emerging economies’ increasing demand for food and in particular meat.

“When you look a bit further ahead, the whole issue of growing bioenergy and sequestering the energy in the ground is putting real pressure on land use. Even if deforestation rates are trending downwards in some countries, still there’s a persistent risk that we may start to extract those resources again.”

The authors warn that Brazil’s deforestation ‘cannot be considered in isolation’, and recommend ‘regulating several points in the supply chain’ given the  complex nature of food production.

Efforts to protect the planet’s forests are centred around the UN’s REDD+ programme and various bilateral aid agreements.

Figures from the UK-based Overseas Development Institute (ODI) indicate that since 2007, US$2.78 billion has been pledged for REDD initiatives, 84% of which has been banked by donors.

Of that, only US$486 million has been delivered to projects on the ground – illustrating the financial gap between the cattle industry and environmental campaigners.

“Increased consumption without improvements in yields will put more pressure on forests more generally, and that will put pressure on the REDD system in terms of verification,” Peters adds.

“If you have the rich nations protecting forests through REDD and at the same time driving that process – contradicting itself – it adds to the pressure.”

VIDEO: What is REDD+ and why does it matter?

This study has been released at a time when consumption levels in the developed and developing world and their effect on global emissions are coming under increasing scrutiny.

Research published in the UK reveals that when the consumption of goods produced overseas is accounted for, UK emissions have risen 20% in the past 20 years, contradicting official figures which say they have fallen 19% since 1990.

Commenting on the report, Emily Brickell, a forests and land use expert at the ODI said pressure on the Amazon is likely to increase due to demand from emerging economies.

But she advised policymakers to tread carefully with a Brazilian government hostile to outside interference, particularly in the Amazon region.

“We have to be careful when thinking from a development perspective not to say – well we shouldn’t trade with Brazil – we shouldn’t buy the beef or soy, because that doesn’t really fix the problem,” she said.

“Instead we need to find a way for the trade to support beef or soy that has been grown in a much more responsible way and that hasn’t contributed to deforestation.

She added: “We’re facing an interesting time because of these emerging economies, which are growing in terms of their influence and their political voice, and also their role of demand. It changes the actors in terms of who can actually change.

“The EU or the USA could put in measures but we need to understand how China or Russia are going to behave.”