The $600m plant’s hundreds of mirrors direct sunlight towards pipes full of oil to drive steam turbines that in turn provide enough electricity for thousands of homes.

In a country whose vast wealth is generated by selling oil, adopting a new technology that produces only 100 megawatts of power – about a tenth the amount of a large coal-fired plant – may seem a mere token, but it is part of a much larger industrial strategy for the region.

Serious money and political clout in Europe, the Middle East and North Africa is aimed at building hundreds of similar plants. The potential is so great that all the electricity requirements of these desert countries – and a good slice of Europe’s – could be met by 2050. 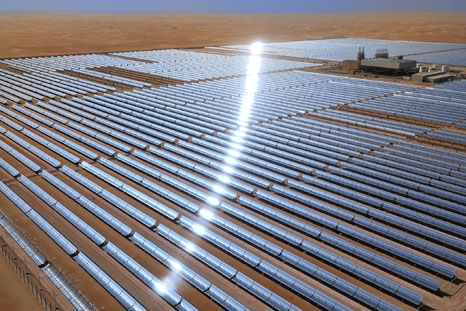 European companies are now putting serious investment into a scheme to bring electricity from North Africa across the Mediterranean to their shores. Algeria, Egypt, Libya, Morocco and Tunisia are among the Saharan countries that could provide all their own power and much of Europe’s. Morocco and Tunisia are already building plants, and Morocco has an electricity connector to Spain.

It has long been known that harnessing the power of the sunlight that shines on a few hundred square miles of desert would be enough to provide electricity for all of mankind’s needs. How to collect the power and transport it was the problem. Now both technical barriers to development have been solved with a variety of schemes.

The Abu Dhabi plant that uses mirrors is one of a number of similar ideas that arrange reflectors to concentrate the Sun’s rays to make electricity. Several have now been proved to work commercially – and the price of power continues to come down. These plants are in operation in many sunny parts of the world including California, Spain and Australia.

Photo-voltaic cells that make electricity direct from sunlight are even more prevalent, with the price of panels also continuing to fall. Add to the power of sunlight the fact that many desert areas are also windy, and the potential for power production is huge.

A factor that has previously worried investors is that even in the desert the Sun does not shine at night, when much of the electricity is needed. To get round that a system has been developed to store excess heat in molten salt and use it to generate electricity after dark. The wind turbines in the desert built alongside the solar arrays would of course continue to pump out power at night.

These cables, developed in Europe, are not theoretical: they are already in use in China. Super-conductors could be laid across the Mediterranean so that North African sunshine could power Europe.

The organization that aims to create a super-grid across North Africa, the Middle East and Europe to utilize this resource, Dii, accepts that the problems are not just technical but also political.

Some of the countries with the greatest solar resource that would need to be connected to each other to make maximum gains from the technology are not good friends.

This would make a super-grid difficult to construct, and electricity supplies liable to disruption if disputes broke out. Power plants would also be easy targets for terrorists.

There are other political sensitivities. The European Union, and particularly Germany, which is very keen on the idea of exploiting this renewable resource, are anxious that Africa and the Middle East should feel ownership of the projects rather than that they are being leant on to cooperate.

European politicians feel it is important that these countries should also be the first to get the benefit of the solar power stations with the electricity being used locally, and only surpluses exported across the Mediterranean.

There are now 36 partners in the Dii project, with most of the money and expertise coming from Germany and other large European manufacturers. According to the German Aerospace Centre, investment would need to be €400 billion by 2050 in plants and transmission lines to realize the dream of providing the entire electricity supply for North Africa and 15% of Europe’s needs.

Studies have shown that even with transmission losses it is cheaper to construct solar plants in North Africa than in southern Europe. This is partly because the Sun shines from 3,000 to 3,500 hours a year, with greater intensity than in Europe, but also because there are large tracts of unused land for the construction of fields of mirrors or lenses to concentrate the solar rays.

Lack of water to clean the mirrors, and for cooling, is one of the technical problems still to be overcome. But like all newer renewable technologies, the cost of concentrated solar power is expected to fall because of mass production and to be considerably cheaper than rivals like nuclear power. What is needed is the political will to make it work.