US Secretary of State John Kerry has announced a new partnership with Japan to tackle climate change on three fronts.

The deal released on Sunday is similar to an agreement with China earlier in Kerry’s tour of Asia.

“Japan, as we all know, is also a vital partner with respect to addressing the question of climate change,” said Kerry. “The Foreign Minister and I agreed to raise the initiative above the level that it is today, much as we did yesterday at Beijing, because of the urgency of this issue.” 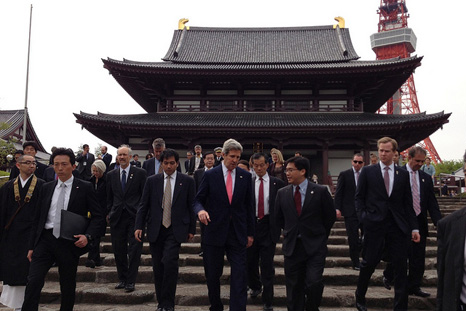 Minister Kishida said future work with the US would be tied to the three pillars outlined in the new bilateral agreement.

“We agreed to cooperate based on the process of UN-led negotiations on building the future framework and to low-carbon growth realization and penetration, three, a society resilient toward climate change, including adaptive capability and disaster mitigation,” said Kishida.

Neither the US or Japan are part of the second phase of the Kyoto Protocol emissions reduction treaty. They have often worked together in the UN climate talks as part of the Umbrella Group, which has a reputation for blocking progress.

The agreement with Umbrella group partner Japan provides a further signal of the Obama Administration’s efforts to tackle climate change through high-level cooperation.

Despite hostility in Congress to any climate change deal, Kerry has agreed similar arrangements with Australia, South Korea and China.

Last week Kerry and other G8 Foreign Ministers met in London to discuss a wide range of issues including climate change.

Domestic critics say Secretary Kerry’s decision on the approval of the Keystone XL oil sands pipeline will be the first real test of his climate credentials.

The 2011 Tsunami devastated Japan with the resulting Fukushima nuclear accident triggering the shutdown of the country’s vast network of nuclear power plants.

This led to the country investing in fossil fuels, particularly natural gas. Emissions climbed 3.9% in 12 months after the disaster.

The promise, agreed through the UN’s climate body the UNFCCC, to reduce its greenhouse gas output by 25% by 2020 compared to 1990 levels was shelve by Prime Minister Shinzo Abe.

The Japanese delegation at the UN climate talks in Doha last December refused to speculate on the future of its emission reductions choosing instead to focus on the country’s climate finance contributions, which it claimed exceeded its fair share.