The findings explain a series of sudden collapses of ice shelves in the last 20 years, which scientists studying them had not expected.

Researchers say the melting that is now occurring could lead to further dramatic events, making the loss of large quantities of ice on the Peninsula more likely, and adding to sea level rise.

The results are significant because in the last two decades scientists have been divided on whether the Antarctic would gain mass through extra snow falling and so reduce sea level rise, or would lose ice because of higher sea and air temperatures and so multiply the effect. 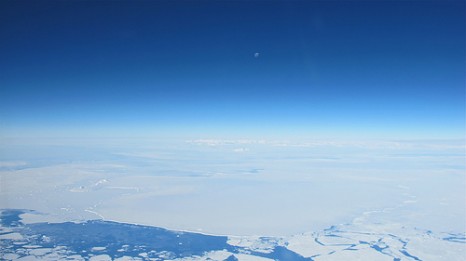 Antarctic ice melt is significant as it increases the chances of sea level rise (Pic: NASA)

In 2008 a UK-French team drilled a 364-metre ice core from James Ross Island, near the northern tip of the Peninsula, with the idea of measuring past temperatures in the area. What surprised them was that the core also gave an unexpected insight into ice melt in the region over that period.

Layers in the ice core showed periods when summer snow on the ice cap thawed and then refroze.  By measuring the thickness of these melt layers the scientists were able to examine how the history of melting compared with changes in temperature at the ice core site over the last thousand years.

Lead author Dr Nerilie Abram of the Australian National University and the British Antarctic Survey (BAS) said: “We found that the coolest conditions on the Antarctic Peninsula and the lowest amount of summer melt occurred around 600 years ago.

“At that time temperatures were around 1.6°C lower than those recorded in the late 20th century and the amount of annual snowfall that melted and refroze was about 0.5%. Today, we see almost ten times as much (5%) of the annual snowfall melting each year.

“Summer melting at the ice core site today is now at a level that is higher than at any other time over the last 1,000 years.  And whilst temperatures at this site increased gradually in phases over many hundreds of years, most of the intensification of melting has happened since the mid-20th century.”

Dr Robert Mulvaney from the BAS led the ice core drilling expedition and co-authored the paper.  He said: “Having a record of previous melt intensity for the Peninsula is particularly important because of the glacier retreat and ice shelf loss we are now seeing in the area.

“Summer ice melt is a key process that is thought to have weakened ice shelves along the Antarctic Peninsula leading to a succession of dramatic collapses, as well as speeding up glacier ice loss across the region over the last 50 years.”

The changes in the Peninsula do not necessarily apply to other parts of Antarctica, for example the West Antarctic Ice sheet, where melting is occurring and there is potentially an even greater risk of large-scale sea level rise.

It is not yet clear that the levels of recent ice melt and glacier loss in West Antarctica are exceptional or are caused by human-driven climate changes.

However, Dr Abram said: “This new ice core record shows that even small changes in temperature can result in large increases in the amount of melting in places where summer temperatures are near to 0°C, such as along the Antarctic Peninsula, and this has important implications for ice instability and sea level rise in a warming climate.”