Developing nations are spending $396bn on fossil fuel subsidies a year while receiving $5bn in support to tackle climate change, according to a new study by the Overseas Development Institute (ODI).

The UN climate negotiations agreed to find $100bnof climate finance a year from 2020 onwards with a meeting in Washington DC this week exploring ways to source this from the private sector.

The ODI’s At Cross Purposes report warns that far greater action will be required from politicians to address what it calls skewed policies that support high emitting fossil fuels in large numbers while struggling to help nations to adapt to the impacts of climate change.

“There is a real risk that the international community is throwing green money after brown by pursuing project based approaches to a problem that requires a far more catalytic effort,” said the report’s author Shelagh Whitley.

“There is an enormous challenge to be met and the current approach risks being as effective as sticking a plaster on a broken leg,” she added. 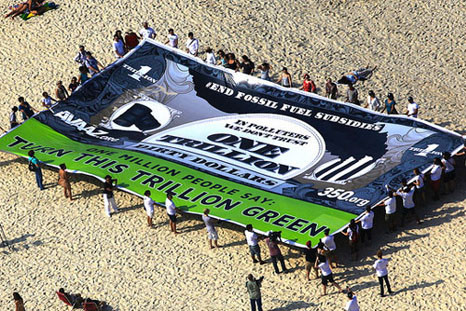 “$5bn is not a small amount of money and it can make a real difference but we need to assess how it is spent. At the moment there are too many people supporting a piece-by-piece project based approach to a problem that is far greater than the sum of its parts.”

The report also found that five countries, China, Egypt, India, Indonesia and Mexico, appear in the list of top 12 recipients of climate finance and the top 12 list of providers of fossil fuel subsidies to consumers.

“Fossil fuel subsidies are just the beginning of a long list of subsidies that Governments provide which can be seen to skew the field against green investment,” said Whitley.

“We need to ask ourselves what it is that can persuade policymakers in London, Beijing and Delhi of the need for long-term solutions that overcome the short-term political temptations of subsidies.”

Support for fossil fuels can also come in the form of tax breaks to producers rather than direct reductions in cost for consumers.

The IMF has made addressing subsidies a condition of some of its loans. Cuts in Jordan triggered by an IMF loan arrangement led to protests.

Many nations in the Middle East are using subsidies to soften public feeling, according to the International Energy Agency’s (IEA) deputy executive director Richard H Jones. He says many are looking for alternative ways to lower cost such as promoting energy efficiency.

The G20 pledged to address the issue but has so far only discussed a voluntary review among members.

The subject was prominent at the Rio+20 Sustainable Development summit last summer but similarly loose language left plenty of room for manoeuvre.