G8 Foreign Ministers stressed the need for more attention to the security and economic threats posed by climate change at a meeting in London yesterday.

The Ministers, including those from Japan, Russia, USA and UK said the effects of an increasingly variable climate will put pressure on resources, a topic they believe is worthy of further discussion.

“Climate change remains a key global challenge which, if not controlled, would have dramatic consequences not only on the environment but also on economic prosperity,” read the summary of the discussions issued after the meeting.

There was no indication that climate change would feature highly at the G8 summit in June. As RTCC reported Downing Street has blocked efforts from France and Germany to place the issue on the agenda. 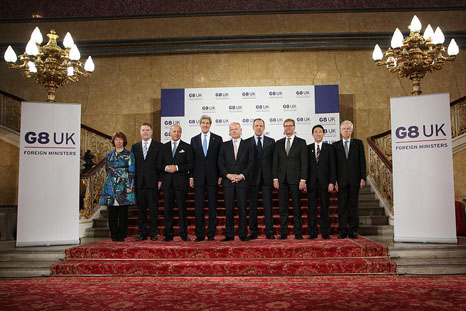 The communique repeated the G8 countries support for the UN climate negotiations, which are working towards a legally binding deal to be signed in 2015.

Recognising the potential for climate change to act as a ‘risk multiplier’, Ministers said they would ensure governments worked closely to monitor and evaluate the threat posed by floods, droughts and other extreme weather events.

“Officials from interested G8 countries will meet to consider the potential consequences of climate change and associated environmental and resource stresses as a contributing factor to increased security risks globally, and report to Foreign Ministers,” they stated.

The addition of the wording “interested G8 countries” will placate Russia who recently joined China in blocking a formal discussion of climate change at the UN Security Council in February.

Climate change has been identified as a security risk by a number of senior military figures talking about the issue.

Neil Morisetti, the British Foreign Secretary’s new Special Representative for Climate Change and a former Rear Admiral in the Royal Navy, told RTCC he plans to devote a substantial part of his role explaining the potential security threats of global warming to the public.

“You could argue in northern Europe that this doesn’t affect us,” he said. “But the reality is we live in a globalised world, and we’re very much dependent on other parts of the world for our own well-being and our own prosperity.

Over 100 countries now regard climate change as a national security concern according to a report by US analysts American Security Project (ASP).

Climate change remains a key global challenge which, if not controlled, would have dramatic consequences not only on the environment but also on economic prosperity. G8 Ministers recognised climate change as a contributing factor to increased economic and security risks globally.

The G8 agreed to consider means to better respond to this challenge and its associated risks, recalling that international climate policy and sustainable economic development are mutually reinforcing. Officials from interested G8 countries will meet to consider the potential consequences of climate change and associated environmental and resource stresses as a contributing factor to increased security risks globally, and report to Foreign Ministers.

Ministers recognised the ambitious measures already undertaken to reduce greenhouse gases, noting that action needs to continue and intensify as a matter of urgency.

Ministers remain committed to long term efforts with a view to limiting effectively the increase in global average temperature below 2 degrees Celsius above pre-industrial levels, consistent with science.

The G8 remain fully committed to the UNFCCC process; to achieving, by 2015, a new climate change agreement, applicable to all Parties, which will come into effect and be implemented from 2020; to increase mitigation ambition in the pre-2020 timeframe, including through international cooperative initiatives such as the Climate and Clean Air Coalition; and to the developed countries’ goal of mobilising jointly USD 100bn per year by 2020, from a wide variety of public and private sources, in the context of meaningful mitigation actions and transparency on implementation.

Ministers stressed the importance of transparency in the UNFCCC process. Measurement, reporting, and verification will play a key role with respect to mitigation, adaptation, and international climate finance flows in order to measure progress towards the achievement of our goals.