There are few examples of ExxonMobil and Koch Industries leading climate action but when it comes to carbon capture and storage technology (CCS), they are trailblazers.

Taken at face value CCS sounds like the perfect solution to reduce greenhouse gas emissions. Isolate CO2 at the source and pump it into suitable rock formations – even better if you’re a major fossil fuel producer or consumer.

Exxon and Koch have been using the technology since the 1980s. In contrast the EU is still to back a single demonstration project.

Speaking at the launch, EU Energy Commissioner Günther Oettinger stressed it was critical the continent caught up with the USA.

“We have identified the technical and financial obstructions. Coal is increasing worldwide, gas still produces CO2, so we must continue with CCS,” he said. 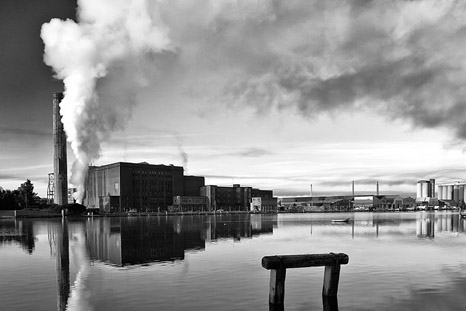 The EU hopes to develop “a range” of low carbon technologies by 2018, with carbon capture an increasingly important part of the puzzle (Source: Flickr/JohnFinn)

A major problem for the EU is its flagging emissions trading scheme (ETS).

The NER300 funding programme is one of the EU’s main tools to incentivise low carbon demonstration projects, but its €9bn of funding is linked to the price of carbon in the ETS.

A strong ETS can provide an incentive by helping big emitters to stay within their emissions allowance and enabling them to sell their spare carbon credits.

As that price has fallen to less than €3 a ton of CO2 from a high of €30, so has the support available.

“In an ideal world the ETS would be the lovely efficient way of funding this. We’re not there. There’s too many uncertainties around future carbon prices for that,” Chris Littlecott, senior policy advisor at the independent environmental organisation E3G told RTCC.

“At the moment unfortunately there is no longer a readily shared view that CCS is coming down the line. That was the feeling four or five years ago.”

“The European Commission is struggling to get its head around CCS and what its role is going to be going forward. My sense is there are still tensions between the Commission’s climate action and energy Directorates.”

When the first round of NER300 grants were announced in December 2012, they were all renewable energy schemes. The shortlisted CCS projects were left on the shelf.

In many cases, this was because national governments and industry failed to provide guarantees that they would provide their share of cash to develop winning CCS demonstration plants.

A decision on the second round NER300 grants will be made later in 2013.

CCS in the USA and Canada is closely linked to efforts to maximise the use of oil and gas fields, hence greater levels of investment.

“The US and Canada are going ahead. There’s no climate policy in place but they have grants and incentives from state and federal level authorities,” he says adding that additional incomes streams also change things considerably.

Pumping captured CO2 into oil fields can maintain the pressure in the reservoir and enable oil companies to save operational costs. This means they can squeeze more oil out of each well.

Investment in CO2 pipelines between reservoirs and sources of CO2 has helped to support this.

“The US is ahead because they have CO2 networks and onshore storage for enhanced oil recovery. They have put money behind the development of CO2 storage options and Europe hasn’t,” says Littlecott.

“Project developers can put together a business plan on that basis. In the EU, it is a case of sticking a finger in the air and trying decide if the ETS is going to be in good shape in five years’ time. That’s not a good enough signal to pull forward a CCS market.”

Amid the gloom there are signs the EU is not standing still on the issue.

The bloc’s energy policy is heavily dependent on gas fired generation yet it still aims to cut emissions by 80% by 2050, making CCS all-but essential.

Climate chief Connie Hedegaard says it is the Commission’s intention to have “a full range of low-carbon projects” underway by 2018, while the 2030 green paper indicates the lessons from the NER300 competition have been learned.

It suggests developing a quota for CCS that would see industry given a target volume of emissions to capture. Those able to install CCS more readily would have an incentive to press ahead and offer the credits to laggards. This would be independent of the volatile EU carbon market.

“It’s a very interesting proposal, especially when you think about where the low hanging fruit is. If you take gas reforming at LNG plants, or the production of hydrogen or ammonia, there is lots of near-pure CO2 produced that is currently vented into the atmosphere,” Littlecott says.

“These opportunities are not being picked up by power sector approaches like that of the EU. The certificate scheme could be a very good way to rapidly accelerate action by picking out the low hanging fruit.”