Scientists in China have revealed the world’s lightest material, a carbon gel six times lighter than air, could provide a boost to a number of emissions slashing technologies.

From batteries to desalination, a new carbon aerogel derived from graphene, could have a big role to play in improving a number of existing low carbon methods.

Carbon aerogels have been around for a while but the latest to be revealed has broken the record as the world’s lightest  material and is far easier to manufacture than some of its predecessors.

Professor Gao Chao of Zhejiang University who led the research, recently published in Nature, said he expects a number of environmental applications for the new substance.

Graphene, one atom thick sheets of carbon, has made a name for itself in its own right. Aerogels fuse graphene oxide and carbon nanotubes together to create a tiny scaffolding like structure that may look flimsy but is actually incredibly strong. 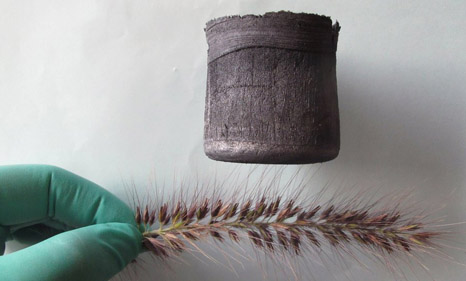 The super absorbent material could also be used to mop up oil spills as it can hold 900 times its own weight in liquid.

Here’s a summary of some of the key low carbon opportunities for the new material:

As climate change adds additional stress to the existing water crisis, many are forced to turn to desalination to extract salt from sea water with electricity.

Using porous carbon aerogels as the electrodes increases the surface area and makes the process more energy efficient. Industrial scale desalination plants churn out thousands of tons of CO2 a day. Even a small improvement could be significant.

Early aerogels have already been used to develop large capacitors, electrical components that store up charge then release it in a short burst (that’s the buzzing noise you’ll here as a camera flash recharges).

The improving technology is helping capacitors to catch up with traditional batteries in terms of how much energy they can store in a given volume.

Next generation capacitors powered by ever improving aerogels could be used in hybrid vehicles and even mobile phones. The supply might not last as long but charging could be done in seconds.

Silicon based aerogels, which have been around since the 1930s have long been used for thermal insulation and in time as the material becomes cheaper, carbon aerogels could replace them and improve performance.

Coating hot water pipes, boilers, ovens, furnaces and engines can not only save energy but also defends against fire.

Carbon aerogels are right down on the ‘black end’ of the infra-red spectrum, that basically means they are very good at absorbing solar energy and good have potential as solar energy collectors.