India could be on the verge of departing from its long held negotiating position and adopt binding emission reduction commitments.

A report in the Times of India says the government plans to commission a study assessing when the country’s greenhouse gas emissions are likely to peak.

“The year when India’s emissions trajectory peaks before it starts to dip is expected to influence the date from when the government will be ready to take on a cap in absolute terms on greenhouse gases under the 2015 agreement,” it says.

There is no indication of how ambitious those commitments could be, or when they could come into effect, but it could mark a change in the country’s position at the international talks. 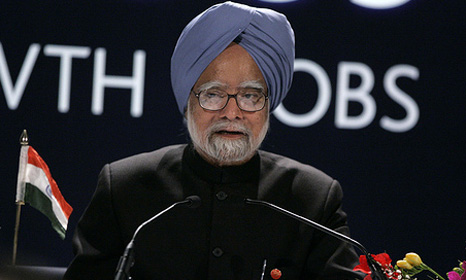 India’s PM is unwilling to commit to cuts that could harm the country’s economic growth (Pic: Flickr/London Summit)

Two months ago Prime Minister Manmohan Singh said it was not up to developing nations to make ambitious pledges at the UN climate talks.

“We have already taken several major steps on the path of low carbon growth. Now is the time for the richer industrialized countries to show that they too are willing to move decisively along this path,” he said.

However with the talks in stasis, there are signs poorer nations are losing patience and determined to take more aggressive leadership positions.

Last week a negotiator from the Least Developed Countries group said they were “no longer waiting for others to act”.

“I think the LDCs are now for low carbon pathways for all. They are even ready to go first in helping to cut back global greenhouse gas emissions, though they are the ones least responsible for increasing those emissions,” Quamrul Chowdury said.

Despite being the world’s third largest source of greenhouse gas emissions after China and the USA, India has one of the lowest per capita emissions rates in the world.

But given its vast population this is expected to rise dramatically in the coming decades as the government rolls out its plans to provide all the country with access to electricity.

The country is investing heavily in new coal power plants, with a 2012 World Resources Institute paper estimating it has 455 projects in the pipeline.

Pollution levels are also becoming an increasing problem in cities. A study released at the World Economic Forum in Davos reported the country has the worst air quality on the planet.

Renewable energy’s share of India’s electricity generation is small compared to fossil fuels, but the government has introduced a levy on coal, plans to deploy a 1,000MW of solar thermal power generation a year and aims to restore large parts of the country’s forests.