Fossil fuel emissions have been linked with reduced growth rates of coral reefs in a new study published in the Nature Geoscience journal.

Scientists say fine particles in the air from burning coal or volcanoes shade coral reefs from sunlight and cool the surrounding waters.

Corals are a vital part of ocean ecosystems. Up to 25% of species depend on them for food and shelter.

Scientists say this is the first study of its kind to make a connection between the concentration of particulate pollution in the atmosphere and reduced growth rates. 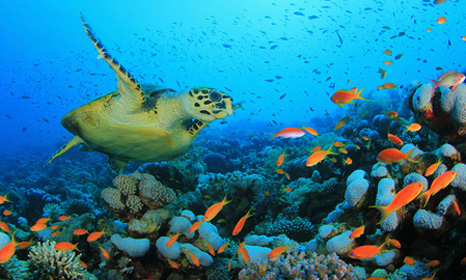 “This can reduce the light available for coral photosynthesis, as well as the temperature of surrounding waters. Together these factors are shown to slow down coral growth.”

The authors used a combination of records retrieved from within the coral skeletons, observations from ships, climate model simulations and statistical modelling.

Researchers say they hope this will lead to a better understanding of how coral growth may change in the future, taking into account future carbon dioxide levels and localised sources of aerosols such as industry or farming.