Fizzy volcanoes could halt climate change in its tracks

While world leaders dither on taking action about climate change, volcanologists have found that if we are unlucky enough a cloud of volcanic ash from Iceland might solve the problem for us by blotting out the Sun.

The eruption in Iceland in 2010 of the volcano Eyjafjallajökull, which caused 100,000 flights to be cancelled and stranded millions of people, was small-scale compared with what could happen.

Not only could Iceland’s eruptions be up to 100 times more powerful, they could shower vast quantities of dust into the atmosphere, not just disrupting air flights but cutting out sunlight.

Previous archaeological work on peat bogs and lake beds across Europe has found layers of volcanic ash. The dates of these layers coincide with population crashes in various places, including Scotland. 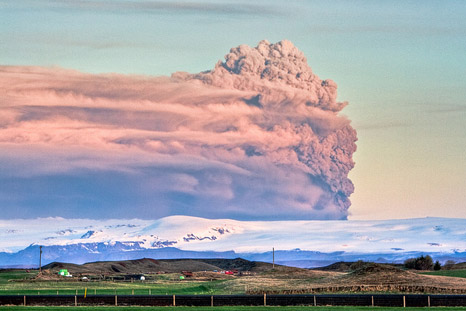 It seems that the lack of sunshine associated with the falls of ash caused crop failures and famine across large swathes of Europe. If blasted high enough, fine ash and volcanic aerosols can take two years to fall out of the atmosphere.

A team from the UK’s Open and Lancaster Universities has discovered a “fizzy” magma in Iceland, which increases the likelihood of disruptive ash clouds from future eruptions (magma is molten or partly-molten subterranean rock which is ejected from the Earth as lava.)

Published in the journal Geology, the team’s research showed that many of the largest explosive eruptions in Iceland involve a viscous, high-silica magma called rhyolite, and are driven by volcanic gases (mostly water vapour and carbon dioxide).

It is these gases that give a volcanic eruption its fizz. At depth they are dissolved within the magma, but as it rises towards the surface during an eruption the gases expand dramatically, causing the magma to froth and accelerate upwards as foam. The viscous rhyolite foam breaks down into tiny ash fragments, which form vast clouds.

Drs Jacqui Owen and Hugh Tuffen (Lancaster University) and Dave McGarvie (the Open University) analysed pumice and lava from an eruption at Iceland’s Torfajökull volcano some seventy thousand years ago.

Within these samples they found tiny pockets of magma, called melt inclusions, which trapped the original gas. By measuring the gas trapped in the magna they could determine its fizziness.

The surprise was just how fizzy this magma was, comparable with the highly explosive volcanoes of the Pacific rim. It means that the Icelandic volcanoes are much more dangerous to life on the planet than was previously thought.

Dr Dave McGarvie, senior lecturer, Volcano Dynamics Group at the Open University, said: “We know that large explosive eruptions have occurred at infamous volcanoes such as Hekla and Katla, but it is important also to appreciate that large explosive eruptions are also produced by less well-known Icelandic volcanoes such as Torfajökull and Öraefajökull.”

Dr Tuffen, Royal Society University Research Fellow at Lancaster University, said: “The discovery is rather worrying, as it shows that Icelandic volcanoes have the potential to be even more explosive than anticipated.

“Added to this is the view of several eminent scientists that Iceland is entering a period of increased volcanic activity. Iceland’s position close to mainland Europe and the north Atlantic flight corridors means air travel could be affected again.”