Critics of renewables have always claimed that sun and wind are only intermittent producers of electricity and need fossil fuel plants as back-up to make them viable. But German engineers have proved this is not so.

By skilfully combining the output of a number of solar, wind and biogas plants the grid can be provided with stable energy 24 hours a day without fear of blackouts, according to the Fraunhofer Institute for Wind Energy and Energy System Technology (IWES) in Kassel.

For Germany, which has turned its back on nuclear power and is investing heavily in all forms of renewables to reduce its carbon dioxide emissions, this is an important breakthrough. 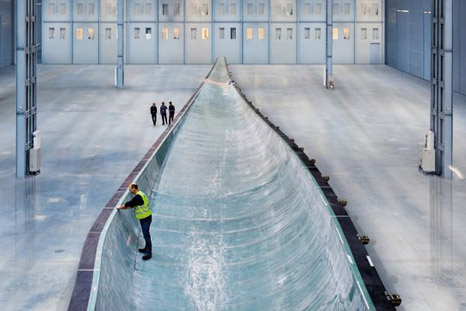 Germany is developing its renewable energy resources. Siemens has produced the world’s largest wind turbine (pictured) which has a 154m diameter (Source: Siemens)

The country has a demanding industrial sector that needs a large and stable electricity supply, and some doubted that this could be achieved in the long term without retaining nuclear or large fossil fuel plants.

Solving the problem is becoming urgent. The latest figures show that on some days of the year the electricity being generated from sun, wind, biomass, water and geothermal production already accounts for more than half of the load required in the country.

The research is funded by the German Federal Ministry of the Environment and is aimed at showing that the entire electricity grid could be run on renewable energy.

Dr. Kurt Rohrig, deputy director of IWES, said: “Each source of energy – be it wind, sun or biogas – has its strengths and weaknesses. If we manage to skilfully combine the different characteristics of the regenerative energies, we can ensure the power supply for Germany.”

The idea is that many small power plant operators can feed their electricity into the grid but act as a single power plant using computers to control the level of power.

Scientists linked together 25 plants with a nominal power output of 120 megawatts. Surplus power could be used for charging electric vehicles and for pumped storage (pumping water uphill into a reservoir to produce hydropower later).

When many small producers work together, then regional differences when the wind blows or the sun is intermittent are balanced out in the grid and can be boosted by controllable biogas facilities.

If there is too much surplus energy then the power can also be used to create and store thermal energy to be used later.

Kasper Knorr, the project manager for the scheme, which is known as the Combined Power Plant2 research project, says the idea is to ensure that the consumer is supplied reliably with 230 volts at a frequency of 50 Hertz.

The current system of supplying the grid with electricity is geared to a few large producers. In the new system, with dozens of small producers, there will need to be extra facilities at intervals on the system to stabilize voltage. Part of the project is designed to find out how many of these the country will need.

The project has the backing of Germany’s large and increasingly important renewable companies and industrial giants like Siemans. Researchers will be demonstrating the system at the Hanover Trade Fair from April 8 to 13.