Writing in the LA Times, Hansen said approving the plan to build a pipeline from the Canadian tar sands to refineries on the US gulf coast, would deliver a “crushing blow” to the climate.

“Researchers now say that the Alberta tar sands contain 360 to 510 billion tons of carbon – more than double that of all oil burned in human history,” he wrote.

“The President stands at a fork in the road: Rejecting the pipeline will show the world we are serious and determined to be on the right side of history. Approving it will signal we are too entrenched with business-as-usual to do what’s right by the people, planet and future generations..

“All of President Obama’s achievements will fade if he doesn’t act swiftly and decisively on climate change. Rejecting Keystone is the first step.”

Hansen announced his imminent retirement from NASA’s Goddard Institute for Space Studies this week. He said he could not contribute to legal action against the US government if he was working for one of its agencies. 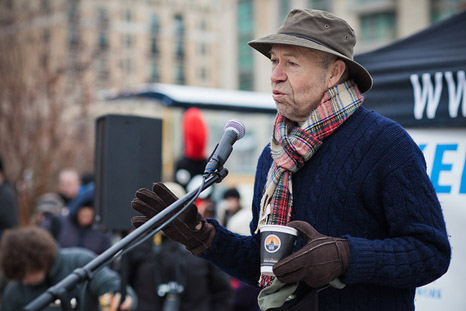 The State Department will issue its recommendation to President Obama later this year with no decision expected until late summer 2013.

Canada is looking for tar sands oil buyers with a number of plans underway to access the refineries and ports required to export it.

“Only with a substantial increase in pipelines to the coasts, and with access to markets overseas, can the tar sands industry meet its eye-popping production targets — a full tripling of output in coming decades — along with the crushing blow that would deliver to our climate,” said Hansen.

Two small spills of thick tar sands oil in the US this week have demonstrated the additional damage it can do. It subsequently emerged that Exxon-Mobil does not pay the 8¢ per barrel contribution to the US spill defence fund for tar sands products as they are not technically classified as oil.

A tars sands oil spill in the Kalamazoo river was the largest onshore spillage in US history. It received little attention as it coincided with the Deepwater Horizon accident.