Tony Abbott will scrap the Australian Climate Commission and bin the country’s new carbon tax if his Liberal-National coalition is elected later this year.

The leader of the Liberal opposition, who once called climate science “absolute crap”, has already announced plans to close the climate change department within government and merge it with the environment portfolio.

And speaking to Sydney network Macquarie Radio on Wednesday, he indicated Climate Commission chief Tim Flannery could also find himself out of a job in September.

“There are a number of bureaucracies that this government has set up, four associated with the carbon tax,” he told broadcaster Ray Hadley.

“When the carbon tax goes, all of those bureaucracies will go and I suspect we might find that the particular position you refer to goes with them.

“It does sound like an unnecessary position given that the gentleman in question gives us the benefit of his views without needing taxpayer funding.” 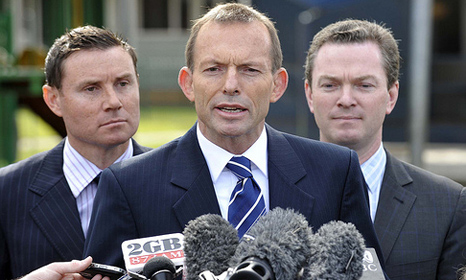 Flannery later defended his work on ABC Radio: “I think we do an important job and that job needs to be done,” he said. “There is a real need in parts of the community for the information we provide.”

Earlier this week the Commission, which is an independent body funded by the government, released a report warning Australia’s agricultural heartlands could face a series of devastating droughts and bushfires due to climate change.

The country recently experienced its hottest summer since records began in 1910, with area-averaged temperatures hitting 40.30°C (104.54°F) on January 7, forcing the Bureau of Meteorology to add new colours to its map.

The report called for the government to support ambitious cuts to global greenhouse gas emissions. Australia has the highest per capita emissions for a developed country, and is also the world’s largest exporter of black coal.

The adoption of the carbon tax came in the face of deep hostility from voters and the political opposition, and cost Prime Minister Julia Gillard’s Labour government considerable political capital.

The law set a fixed carbon tax of US$23.78 a tonne on the top 500 polluters from July 2012. Last August Canberra also agreed to develop an emissions trading scheme linked to the European Union’s by 2018.

And in December Australia committed to taking part in an extension to the Kyoto Protocol – aiming to cut 5% of emissions on 2000 levels by 2020.

In 2011 Abbott made a “pledge in blood” to repeal the tax if he came back into office, but it may not be that simple.

A recent report from Bloomberg New Energy Finance (BNEF) estimated there is a 32% chance the carbon tax will be scrapped after the election.

Current polls predict Tony Abbott will win the election, but he would need to secure a Senate majority in 2014 to rescind the price, indicating it could be 2015 before any action is taken.

Despite heavy lobbying from energy intensive business ahead of the adoption of the tax, it appears to have had a limited impact on economic growth.

Unemployment and inflation remain steady, while the All Ordinaries Index which tracks Australia’s largest 500 companies is up 18%.

Wholesale tariffs have risen in line with the carbon price. BNEF attributes this to investment in transmission and distribution.