The viability of the flagging EU Emissions Trading scheme (ETS) has been called into question again following the release of new data by the European Commission.

The carbon trading campaigning and research group Sandbag revealed today the scheme now has an oversupply of 840 million aggravating the already weak carbon price of around €4.

New emissions data for the 10,000 industrial installations covered by the EU-wide cap and trade scheme shows that greenhouse gas output fell in 2012 by 1.4% despite the ETS’s current ineffectual state.

The drop would have been greater were it not for the increase in the use of coal rather than cleaner natural gas for electricity production.

“To function as an environmental policy, an emissions trading scheme must limit pollution below business-as-usual levels, but the EU scheme has so far singularly failed to meet this criterion,” said Damian Morris of Sandbag. 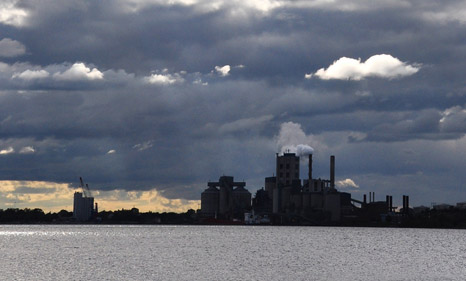 Emissions by sectors included in the EU ETS fell 1.4% according to new data (Source: Flickr/Bochum1805)

A vote by MEPs in two weeks will decide whether to back short term plans to withhold around 940 million permits from the next phase of the scheme.

European Climate Commissioner Connie Hedegaard has made it clear that this is only the first step to fix the ETS. The market became bloated with excess credits following reduced economic output during the recession.

The so-called backloading proposal would address this problem in the short term, which should increase the price of emitting a ton of carbon and incentivise greater efficiencies.

“It is right and imperative that we have a price signal that works and that is why backloading is essential,” said Hedegaard.

“There are other things we can do structurally. But there is no point talking about what we’ll do for the patient in the long term, if it is going to die in the short term,” she said referring to the imminent vote.

Poland is one of the largest beneficiaries of excess credits due to its economic overhaul since 1990, the base year for cuts.

Environment Minister Marcin Korolec, took to twitter to ask why there was any need to fix the ETS as long as emissions were falling. Poland has led resistance to efforts to reform the EU ETS.

#EUETS emissions down 1.4% in 2012 vs. 2011. Where is the increased fossil fuel use? Why do we bother with #backloading if market delivers?!

He believes that ETS reforms could scare big emitting industries such as steel making and cement production to leave the EU taking the associated emissions out of a regulated market, a process referred to as carbon leakage.

Korolec also points out that Poland’s economy grew while its emissions fell.

Poland will be the host of the next round of the UN climate change negotiations.

A deeper cut would require a smaller cap on greenhouse gases imposed on the industrial sectors covered by the ETS.