One of the most fertile areas of south east Asia, the Lower Mekong Basin, faces a bleak future from the impacts of climate change, according to a US-funded study.

The lead author of the study, Dr Jeremy Carew-Reid, says some of its findings are “very shocking”.

Hotter and wetter rainy seasons and more long-lasting dry seasons in Cambodia, Laos, Thailand and Vietnam will jeopardise the region’s reputation as one of the world’s major producers of crops on which hundreds of millions depend. Climate change will also have a profound economic impact in the region.

“We’ve found that this region is going to experience climate extremes in temperature and rainfall beyond anything that we expected”, says Dr Carew-Reid.

The Basin is known for its production of maize and rice, the two grains with the highest worldwide production levels. Rice provides more than a fifth of the calories consumed by humans. The study forecasts fundamental shifts in the kinds of crops  that  can be grown in parts of the Basin. 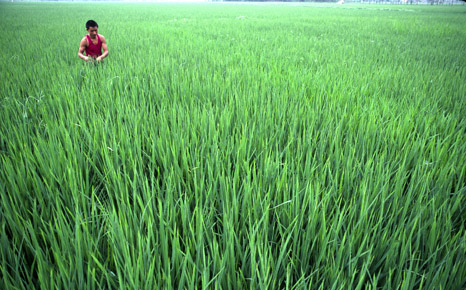 The USAID-funded Climate Change Adaptation and Impact Study for the Lower Mekong examines how changes in temperature and precipitation will affect growing conditions and yields for major crops including not only maize and rice but rubber, cassava, soya and coffee, and  how fisheries and livestock productivity will be affected.

There’s general international agreement that global average temperatures should if possible be prevented from rising more than 2°C above their pre-industrial level, although most climate scientists believe it’s now too late to stop temperatures rising further.

A global average rise of 2°C is expected to mean that parts of the tropics like the Mekong Basin will warm by between  4°C and 6°C by mid-century. The impacts will vary, but all the Lower Mekong countries are likely to see big changes in the suitability of land for important crops.

The study expects higher temperatures and more rainfall to decrease the feasibility of growing rain-fed rice in the lowlands of Thailand’s northern Chiang Rai Province but to increase yields in the north eastern province of Sakon Nakhon.

More rain in Cambodia  is likely to reduce cassava and rubber yields in the Kampong Thom and Mondul Kiri regions, while temperature and rainfall increases will result in coffee in Laos having to be cultivated at higher altitudes.

Hotter and wetter weather will alter the Central Highlands in Vietnam, making the area more suitable for rubber but less so for maize and coffee.

The study also identifies “hot spot” provinces in the Basin where the impact of these changes is expected to have severe effects on food security and livelihoods.

The results of the study will help with the monitoring of how and when the “comfort zones” of key crops – areas where temperature, rainfall and soil conditions create the right conditions for production – will move. The ability to continue existing crop production in these zones is expected to decline.

For fisheries and livestock the impacts of a changing climate may also be serious (fisheries are a key source of protein in the Basin). Feed typically accounts for 65-80% of livestock production costs, so climate impacts on crops like maize and cassava will also damage livestock farmers.

In Vietnam, heat stress may limit the farming of freshwater prawns and flash floods could cause sudden drops in salinity, with disease spreading into coastal shrimp ponds.

The impacts on agriculture will be accompanied by damage to the natural world, with more plant and animal populations and species likely to be lost to extreme temperatures and dry spells.

The study stresses that climate change is not about the environment alone. The countries of the Lower Mekong Basin are major food exporters, and a warming climate will affect every economy in the region.

“Adaptation to climate change does not just mean shifting from one crop to another”, says Paul Hartman, director of the Bangkok-based Mekong Adaptation and Resilience to Climate Change (Mekong ARCC) project, the body responsible for the study. “It also means being aware of potential changes, looking out for warning signs that these changes are beginning to occur, and being prepared to respond.”

In another sign of concern at the implications of climate change for south east Asia, a senior US military figure identified it earlier this month as a priority issue.

Admiral Samuel Locklear, who heads the US Pacific Command, said significant upheaval related to the warming planet “is probably the most likely thing that is going to happen… that will cripple the security environment, probably more likely than the other scenarios we all often talk about.’’

The Boston Globe reported him as saying: “We have interjected into our multilateral dialogue – even with China and India – the imperative to kind of get military capabilities aligned [for] when the effects of climate change start to impact these massive populations.

“If it goes bad, you could have hundreds of thousands or millions of people displaced and then security will start to crumble pretty quickly.’’