Geoengineering could cause drought in Sahel

Less than three weeks after two US researchers called for global agreement on the governance of geo-engineering research, British meteorologists have provided a case study in potential geo-engineering disaster.

Jim Haywood from the Met Office Hadley Centre and colleagues report in Nature Climate Change that fine particles concentrated in the stratosphere could precipitate calamitous drought in the Sahel region of Africa.

The team analysed historical observations from 1900 to 2010 and found that substantial volcanic eruptions in the Northern hemisphere – substantial enough to lift huge clouds of aerosols into the upper atmosphere – preceded three of the four driest summers in the region.

Furious volcanic blasts have been historically associated with climate change: an eruption of Mt Tambora in what is now Indonesia in 1815 was followed by Europe’s notorious “year without a summer” in 1816, along with widespread harvest failure, famine and outbreaks of disease.

The eruption of Mt Pinatubo in 1991 was followed by what climate scientists were later to call “the Pinatubo effect” – noticeable global cooling in the following years. 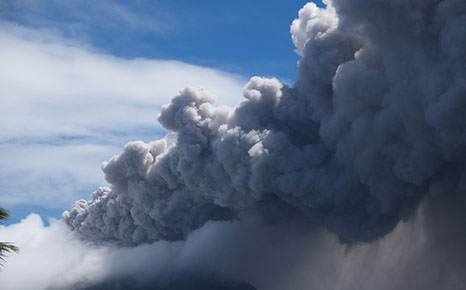 Volcano eruptions offer an idea of how attempts to engineer the atmosphere could work (Pic: Turtle Bay Apartments/Flickr)

But what concerns Professor Haywood and others is not the random nature of volcanic eruption – difficult to predict and impossible to prevent – but the possibility of deliberate injection of aerosols into the stratosphere to moderate global warming.

The Sahel is the name given to a 1,000-kilometre band of savannah in Africa south of the Sahara, stretching from Mauretania in the west to Eritrea on the Red Sea coast.

The four driest periods in this relatively arid region – these periods bear the deadpan scientific label of negative Sahelian precipitation anomalies – were in 1913, 1972, 1983 and 1984. Three of these dry spells followed an eruption of Katmai in Alaska in 1912 and of El Chichon in Mexico in 1982.

The extended drought between 1970 and 1990 in the Sahel region claimed 250,000 lives and created 10 million refugees: it was one of the world’s biggest humanitarian disasters.

All kinds of causes were evoked, including overgrazing, natural variability and industrial exhausts, but Professor Haywood and his colleagues think that volcanic eruptions also strongly influence the sea temperatures in the Atlantic, which are associated with Sahelian drought.

Such associations are difficult to prove conclusively. They concede in their paper that “correlation does not prove causality and the sparsity of significant hemispherically asymmetric volcanic eruptions in the recent historical record hampers definitive attribution.”

In other words, the jury is still out.

They simulated the impact of continued global warming into the future and found that – provided there was no geoengineering – only 11 of the 50 years between 2020 and 2070 would have negative Sahelian precipitation anomalies.

Deliberate geoengineering, however, by loading aerosols into the northern hemisphere stratosphere would cause Sahelian drought.

This could possibly be countered by injecting particles into the southern hemisphere stratosphere, which might have the effect of increasing rainfall in the Sahel countries. But any good there might be countered by a consequent failure of the rains in north-east Brazil.

“Clearly, the juxtaposition of impacts leads us to believe that a global governance agreement for geo-engineering is essential before any practical geo-engineering system is deployed, and much further research is needed,” they conclude.