Australia’s acute vulnerability to climate change has been underlined in a new report by the country’s Climate Commission (ACC).

It warns emergency services to prepare for increased incidences of bushfires and flooding, and says drought is likely to hit the nation’s most productive farmlands in the coming years.

The Commission, which was set up by the government and is formed of economists and scientists, says ambitious actions to cut global greenhouse gas emissions will be needed to prevent the situation escalating.

“There is little doubt that over the next few decades changes in these extreme events will increase the risks of adverse consequences to human health, agriculture, infrastructure and the environment,” the report says.

“Stabilising the climate is like turning around a battleship – it cannot be done immediately given its momentum. When danger is ahead you must start turning the wheel now. Any delay means that it is more and more difficult to avert the future danger.” 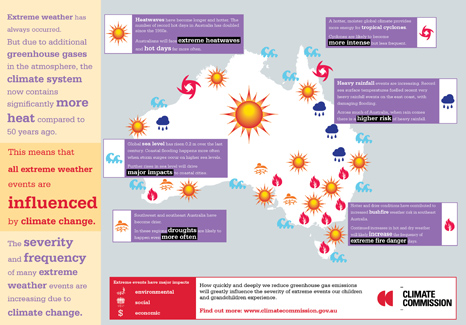 The country recently experienced its hottest summer since records began in 1910, with area-averaged temperatures hitting 40.30°C (104.54°F) on January 7, forcing the Bureau of Meteorology to add new colours to its map.

In a call that is likely to set the Commission on a collision course with some of Australia’s major coal and mining companies, it says the country must do more to cut its own contribution to greenhouse gas levels.

Data compiled in 2011 suggests Australia’s per capita emissions are the highest in the developed world, around 27 tonnes per person compared to a developed world average of 14 tonnes.

It is also the world’s leading coal exporter. Black coal is the country’s second-highest export commodity and over the past decade exports have risen by 50%.

Last year the government introduced a carbon tax, and plans to integrate its emissions trading scheme with Europe’s in the future – but the Commission warns this on its own is not enough.

“Much more substantial action will be required if we are to stabilise the climate by the second half of the century,” it says.

“Globally emissions must be cut rapidly and deeply to nearly zero by 2050, with Australia playing its part. The decisions we make this decade will largely determine the severity of climate change and its influence on extreme events that our grandchildren will experience. This is the critical decade to get on with the job.”

Australia’s farmlands in the south west and south east are among the most productive in the country, and are home to an estimated 20 million people.

Home to farmlands producing wheat, sugar, beef and wine, the report says they are also most likely to be hit by a 10% drop in rainfall by 2030, leading to increased incidences of bushfires and drought.

It reveals the southwest corner of Western Australia has experienced a 15% drop in rainfall since the mid-1970s.

Other areas likely to be affected include the Great Barrier Reef, which has suffered repeated bleaching events from underwater heatwaves and the freshwater wetlands of Kakadu National Park, which are at risk from saltwater intrusion due to rising sea levels.

“Records are broken from time to time, but record-breaking weather is becoming more common as the climate shifts,” said Chief Commissioner Tim Flannery.

“Only strong preventative action, with deep and swift cuts in emissions this decade, can stabilise the climate and halt the trend toward more intense extreme weather.”

– Heat: The number of record hot days in Australia has doubled since the 1960s. The summer of 2012/2013 summer set over 100 heat records, including the hottest summer, hottest month, and hottest day on record.

– Bushfire weather: Extreme fire weather has increased in many parts of Australia, including southern NSW, Victoria, Tasmania and parts of South Australia, over the last 30 years.

– Drought: A long-term drying trend is affecting the southwest corner of Western Australia, which has experienced a 15% drop in rainfall since the mid-1970s.

– Sea-level rise: Sea level has already risen 20cm globally. This means that storm surges ride on sea levels that are higher than they were a century ago, increasing the risk of flooding along Australia’s socially, economically and environmentally important coastlines. For instance, since 1950 Fremantle has experienced a three-fold increase in inundation events.