Developed countries need to work out a plan to raise necessary levels of climate finance when they gather in Washington DC on April 10-11, an advisor to the Philippines has warned.

No representatives from the developing world have been invited to the Ministerial Meeting on Mobilizing Climate Finance, organised by the US State Department.

A leaked agenda seen by RTCC suggests most of the discussions will be focused on leveraging private finance, news that has left many representatives from the Global South frustrated.

The World Resources Institute’s Athena Ballesteros, who is a technical advisor on the Philippines’ negotiating team, says developing countries will be watching the summit closely.

“A very clear message that they have a roadmap and a critical pathway to scaling up finance would be very good news for developing countries,” she told RTCC.

“We understand that they have to have that conversation among themselves, but I think in the future it would be good to open it up and involve stakeholders in those types of conversations, because so many other players have things to contribute.” 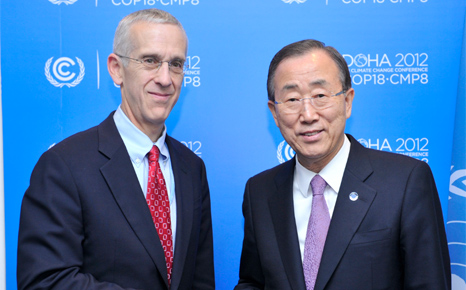 At the 2009 UN climate summit in Copenhagen developed states committed to mobilizing US $100 billion from a wide variety of sources to meet developing countries financing needs by 2020. They also pledged US$10 billion per year of Fast Start Finance (FSF) up to 2013.

Efforts to ensure FSF continues to flow post 2013 hit the wall at last year’s main climate meeting – the agreement merely “encourages” countries to maintain flows between 2013 and 2015. The UK and Germany made concrete pledges but they are in the minority.

The issue is now critical – and what little trust remains between rich and poor countries largely depends on those funds continuing. The question is how the billions needed can be raised, especially while the world oscillates between financial crises.

The agenda’s focus on private finance has some logic. The UN estimate that up to 85% of funding for adaptation and mitigation efforts will have to come from the private sector, a point which UK climate minister Greg Barker – who will attend the summit – never tires of stressing.

WWF climate finance expert Mark Lutes argues the focus on private sources is “not necessarily a problem” but says it’s wrong to suggest this is the only way to leverage investment.

“It appears that the narrative Stern [Todd Stern – lead US negotiator] wants to promote is that private finance is the only answer – and that developed country governments don’t have to contribute any public finance,” he told RTCC.

“Also, only developed countries are invited. This would be acceptable if they were talking about how to share the responsibility for dividing up their commitment to mobilize the $100 billion, but clearly that’s not what they are doing.

“It is hard to see how this meeting will do anything but breed cynicism about the willingness of developed countries to deliver on their financing commitments.”

It’s a view partly shared by Steve Herz from the Sierra Club, who says there is a growing concern “governments want to avoid their own responsibility of acting”.

Others believe there is merit in just the donors meeting – particularly if they can thrash out a meeting in a non-confrontational atmosphere and come to a common position.

“This is a debate which has not progressed very far, and it is therefore necessary that developed countries try and come to a position on some of these issues. This can be followed by a discussion on these points with recipient countries,” says the IIEA’s Joe Curtin.

A leading EU negotiator warned in Doha that any use of the word ‘innovative’ in a financial context should be treated with scepticism, as it could just mean passing the buck to someone else.

But as Steve Herz points out, there are useful discussions donor countries could have.

He argues that a session on the 11th with the working title Promising programs donors are currently supporting to mobilize private finance could be used to limit the ways developed nations subsidise fossil fuels.

“As it stands the US agency gave $10 billion in support [to fossil fuels in 2012] – this is subsidising the problem, so we could shift that to renewable energy,” he says.

Friends of the Earth’s Karen Orenstein suggests plans for a financial transaction or Wall Street tax could also be on the agenda, although this has proved an unpopular topic in the US and UK.

Yet as Joe Curtin points out, the global climate doesn’t care how the money is found.

He says that anything from carbon offset market funds, multilateral development bank assistance, investment loan guarantees, concessional loans, institutional investor funding and equity investment could be on the table, as could a debate over pricing carbon.

Equally proposals published last week by the EU recommending the aviation and maritime industries cough up funds proportionate to their emissions could also be considered. What appears off the table is the nascent Green Climate Fund – a glaring absence from the agenda.

Dealing with the impacts

Adaptation is in the agenda – day two’s session labelled: What are the barriers to scaling up of private investment in climate mitigation and adaptation  promises to be a corker, as there appear to be so many hurdles in this context.

Despite the cold winter much of Europe is enjoying, there is growing evidence that some of the impacts associated with a rising global temperature are already ‘locked into the system’.

This means low-lying countries will have to invest heavily in flood defences and drought-prone regions need to build water resilience strategies.

But while it is possible to see a variety of roles for private finance in mitigation efforts, particularly concerning investment in low carbon technology, adaptation is a harder sell.

In the climate finance debate funding for adaptation and miti­gation are generally lumped together, yet at the Doha talks Oxfam estimated that only 21% of FSF went to adaptation.

“Adaptation efforts in the poorest countries simply will not turn a profit” says Orenstein, while WWF’s Lutes estimates requirements for adaptation and forest protection efforts run into the “tens of billions”.

Joe Curtin makes the equally valid point that given overseas development aid (ODA) and adaptation funding are so closely aligned a means of determining if funds are “new and additional” would also be progress.

What developing countries want most of all is clarity on how the money promised to them will appear, and under what conditions it will be delivered.

All of the negotiators and observers RTCC has spoken to are broadly supportive of this meeting – bar WWF’s Mark Lutes, who says the agenda sets the wrong tone.

What will be important is that participants recognise that there are two sides to the negotiations – even if only one side holds the purse strings: “the questions which should be addressed first and foremost are how can the adaptation and mitigation needs of people in developing countries be met,” says Orenstein.

Curtin says minilateralism could offer a better chance of success in this context, especially if it ensures the heat is taken out of meetings. But ultimately this meeting needs to deliver, otherwise the next round of UN climate talks scheduled to start on April 29 could be painful.

“The US is convening this and they know there are so many stakeholders who are interested in this meeting, so they must have their reasons for having to convene a donors only meeting,” says Ballesteros.

“They need to come away and give a very strong message after that meeting that they have some kind of plan to contribute to plans for long term finance – that needs to come out of the meeting.”

US Finance Agenda April 2013 by www.climatechangenews.com