The morning commute can seem that little bit more arduous for coffee addicts that have been denied their caffeine fix.

But in the future, coffee may have an even more important role to play in your journey if a car developed by the UK’s Co-operative Group can make it from test runs to school runs.

Admittedly it’s not the most hotly contested category in the Guinness Book of World Records but a potentially important proof of concept none the less.

Biofuels from refined crops such as corn and sugar cane attract a lot of negative attention for using up food resources.

The benefits of the Bean Machine is that it uses waste parts of the coffee crop other than the bean. It can also be powered using wood pellets. 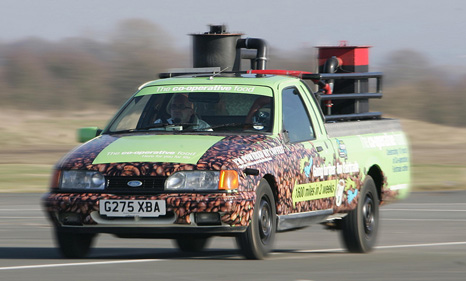 The Bean Machine in action as it breaks the world land speed record…for cars powered by coffee (Source: Flickr/Co-operative)

Switching away from food crops to perennial grasses that grow on marginal land that can’t support farming and waste products such as stems and chaff from crops offer a more sustainable future for biofuels.

If that sounds too complicated or if you’d rather go by air than by road, a waste powered plane will be testing its new fuel source with a flight from Sydney to London in July.

Using unrecyclable plastics melted down to aviation grade diesel, Jeremy Rowsell, an insurance broker and hobby pilot, hopes to prove that there is a more sustainable future for aviation. The 10,500 mile route will be broken down into ten 1,500 legs.

The sector is responsible for 2-3% of global greenhouse gas emissions today but its growth means this share is likely to increase. Improving efficiency on the ground, improving navigation and a biofuel mix are the industry’s best options at present to reduce its footprint.

One way to dodge the biofuel issue is to turn to old fashioned elbow grease.

Students from the University of Maryland have developed a helicopter powered by two sets of pedals, one for your feet and one for your arms.

Sadly the technology is a little impractical. The machine spans 100 feet and can only hover just above the ground.

Video: Why the human helicopter is still a long way off

Human-Powered Helicopters: Straight Up Difficult from NPR on Vimeo.