The planet’s Least Developed Countries (LDC) say they have lost patience with the glacial pace of the UN climate change talks and plan to set their own agenda.

Representatives from the 49-strong LDC group met in Kathmandu over the weekend to discuss a response to the ‘Doha Gateway’ agreed at the last round of UN talks in December 2012.

LDC nations, who include some of the world’s most climate vulnerable states, repeated their concerns that the emission reduction and financial pledges from developed nations are unsatisfactory.

In the aftermath of the 2012 Doha climate negotiations chairman Pa Ousman Jarju told RTCC the status quo was “inadequate”, while Nauru Minister of Foreign Affairs Kieren Keke said it was “difficult to see how the process could continue”.

The group’s new chair Prakash Mathema says they will now take a more assertive stance at the next round of talks, scheduled to start in Bonn at the end of April.

“The adoption of 2015 treaty will prove daunting. However, it is my belief that in meeting these challenges, we should adopt a new mantra in the international climate arena,” he said.

“In our quest to secure a future of climate safety, we must move from an ‘after you’ mentality to a perspective that says, follow us!” 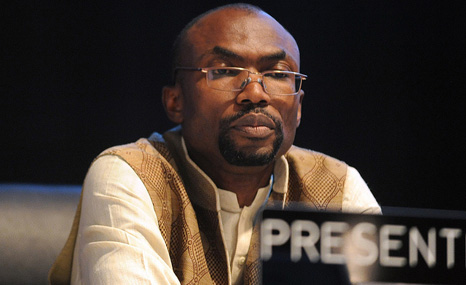 While the LDC’s individual nations boast little economic or political muscle, collectively they act as the conscience of the UN climate process together with the small island states – a point Mathema alluded to in his closing speech.

“The LDCs occupy a unique position in the climate negotiations: we are amongst the most vulnerable; we are amongst the least responsible; and despite this we have already started to put in place some of the most ambitious climate change policies,” he said.

“We should, therefore, use our position to change the international focus and perception of climate change.”

Mathema added: “We can no longer wait expectantly with the attitude of ‘after you.’  Instead, we must stride boldly forward with the mind-set of ‘follow us.’

“It is time the LDCs became the deal makers. It is time we shaped the agenda and the decisions, instead of having them shaped for us.”

The EU alliance with the LDCs during the 2011 talks in Durban was viewed as critical in forcing India, China and to an extent the USA to commit to signing a new deal on climate change in 2015.

UK climate minister Greg Barker told RTCC it was “extremely powerful” in terms of keeping up the pressure for “high ambition”.

Today’s LDC statement appears to suggest the group are now determined to take matters into their own hands, leading to speculation they may work more closely with leading developing nations.

Concerns over the sluggish nature of the UN talks are not restricted to LDC representatives.

Last week UN climate chief Christiana Figueres told an audience from the Pacific island of Tonga the process “lacked urgency” and was simply “too slow”.

“The last three intergovernmental climate negotiations held in Cancun, Durban and Doha have been successful inasmuch as they have achieved what they had to achieve to move theclimate regime forward,” she said, “however, this directional move forward continues to be too slow.”

Figueres added: “Further integration of all three levels, international, national and private sector will also help to reach the low carbon economy that we need to ensure the response to climate change. And respond we must.