World leaders need to re-engage with climate change this year in order that plans to agree a legally binding deal in 2015 remain on course.

“It’s important political leaders come in now,” she said. “They were terribly bruised in Copenhagen but they need to come back in.”

Few world leaders have bothered to attend the UN sponsored climate talks since Copenhagen in 2009, when USA President Barack Obama famously stalked the corridors searching for representatives from China, India and Brazil.

Those that do turn up are typically from states suffering from rising sea levels and extreme weather events.

The 2012 G20 summit did manage to cobble together a loose statement promising to maintain a “focus on inclusive green growth”.

And Ban Ki Moon recently called for a heads of state meeting in 2014, although it is unclear exactly when or where this will take place. 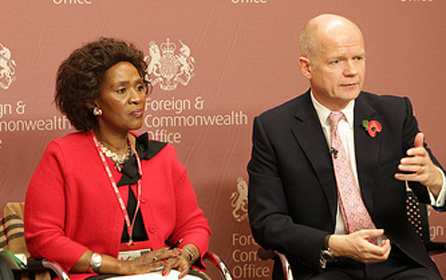 Recognising that “mutual trust between players is fragile” and the need to take into account domestic “political realities”, she said failure to agree on a deal in 2015 would have long-term implications for the process: “If we miss that point, we revert”.

And she argued financial assistance from rich countries to help poorer nations develop low carbon energy systems was still far short of what is required.

“The biggest issue for developing countries has been the issue of finance, which was not resolved at these talks,” she said.

South Africa plays an important role at the UN talks, often working closely with Brazil to build bridges between the developed and developing nations.

The country is especially interesting as it is one of the world’s largest coal exporters, and is also struggling with high levels of poverty and social inequality.

The government recently unveiled plans for a carbon tax of $13 per tonne of CO2 to be implemented in 2015 – Mxakato-Diseko acknowledging that this was only part of the solution.

She added: “Issues of appropriate energy use must be harmonized with the need to overcome racial poverty.”

The 2013 host of the UN climate talks is Poland, whose Environment Minister Marcin Korolec is a well-known fan of shale gas.

Despite that, and Poland’s 85% reliance on coal to generate electricity, Mxakato-Diseko said this perceived lack of climate leadership would not hurt efforts at the talks to cut global emisisons.

“Failure is very public,” she said. “That incentivises the incoming chair to make sure there are no collapses.”