The USA’s onshore wind and biofuel resources are larger than the country’s proven oil reserves, according to a new study by Bloomberg New Energy Finance (BNEF).

The report does not touch on the USA’s solar and offshore wind potential, both of which are steadily expanding.

Solar PV is forecast to grow rapidly in the US from 2013, with BNEF predicting 100GW of capacity added by 2020. Offshore wind development is expected to accelerate towards the end of the decade.

The authors say the study’s aim is to give policymakers more information about the potential of renewables to replace fossil fuels by measuring their potential as barrels of oil. 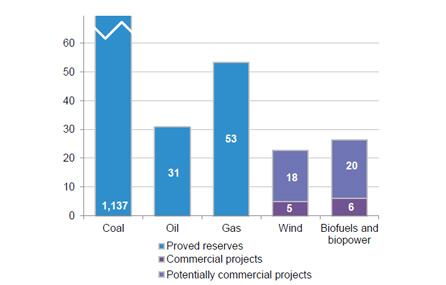 “If companies cannot demonstrate the revenue potential of renewable projects as easily as for fossil fuel reserves, they have less incentive to invest in renewables,” they say.

“Being able to assess renewable and fossil fuel energy reserves on a comparable basis will also allow governments to have a clearer view of their options when developing energy policies.

“At a global level, establishing a convention for estimating reserves and capacity for renewable energy sources also makes it easier to determine the outlook for future energy supply.”

While fossil fuels are expected to supply the majority of the world’s energy for the coming decades, an increasing proportion could come from renewable sources.

The International Energy Agency (IEA) predicts renewables’ share of primary energy could increase from about 13% in 2010 to at least 20% in 2035, driven by falling equipment costs and concerns about the environmental effects of fossil fuels.

Renewable energy potential in South America is even more promising.

BNEF report that in Brazil, reserves in commercial projects from biofuels and biopower are equivalent to over two fifths of the country’s proven oil and gas reserves.

Biofuels’ potential to supply 28.6 bboe in Brazil is unsurprising, given the country has the second largest biofuels sector on the planet. 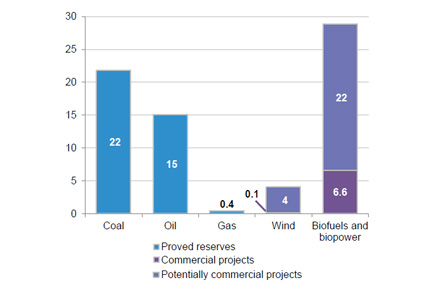 The wind sector is smaller, despite recent investment from companies such as Suzlon, but BNEF predict that recent legislation will make it easier for developers to build larger projects.

Their analysis does not make any estimates of Brazil’s hydropower potential, which currently supplies 75% of the country’s power capacity and 29% of primary energy consumption.

The authors argue that focusing on the total contribution wind and biofuels offer rather than their capacity will provide a clearer picture of the true potential of renewables to replace fossil fuels.

“In the coal, oil and gas industries, resources and reserves are measured in terms of volume,” they say.

“In contrast, renewable energy sources such as biofuels, wind and solar power, are typically expressed in terms of energy per unit time.

“The useful output of a renewable project is given as a capacity, and depends on the characteristics of the technology and the renewable energy source at a particular location.

“This tells us nothing about the energy contribution that these projects will make over their lifetime, or, in other words, the total quantities of energy achievable.”