US Secretary of State John Kerry has stepped up the country’s climate diplomacy speaking to and meeting with key policymakers in China, Asia and the EU.

Kerry spoke to his Chinese counterpart, State Councillor Yang Jiechi on Monday with climate change forming part of a wide-reaching conversation. He also met officials from Australia and the EU ahead of a forthcoming tour of China, Japan and South Korea.

Yang said both parties called for a new type of inter-power relationship, which had charted a course for the development of China-U.S. relations in the new era, according to the Chinese State news agency Xinhua.

Kerry was an ardent climate change campaigner while a senator and it appears that there is no sign of his new role in charge of US foreign affairs interrupting that.

Speaking at an event in Washington last night he reminded his audience, which included New Zealand’s Ambassador to the USA Mike Moore, that time was running out for an effective response to rising levels of emissions.

“So climate change is coming back in a sense as a serious international issue because people are experiencing it firsthand,” he said.

“The science is screaming at us, literally, demanding that people in positions of public responsibility at least exercise the so-called “precautionary principle” to balance the equities and not knowing completely the outcomes at least understand what is happening and take steps to prevent potential disaster.” 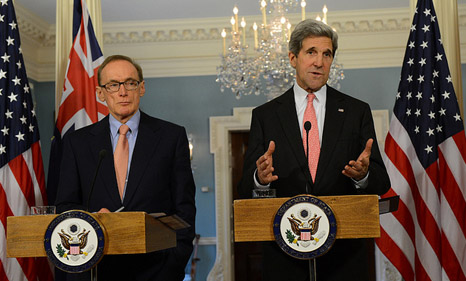 US Secretary of State John Kerry and his Australian counterpart Bob Carr have pledged for closer climate collaboration between their nations (Source: Flickr/State Department)

Following a trip to the Middle East with President Obama, the Secretary of State will visit China as well as South Korea and Japan as he adds to the 38 hours of time on the air already racked up in his new role.

And Kerry revealed plans for a new energy collaboration during a briefing with Australian Foreign Minister Bob Carr on the same day.

“We both share a hope and an expectation that we will increase the energy security dialogue between the United States and Australia,” said Kerry.

“That’s an opportunity for stakeholders in both of our countries to come together and explore new ideas for clean energy, renewable energy production, for modernization of our energy infrastructures, and efforts to combat climate change.

“So we really hope that very soon, we’re going to have a date where we can announce our specific efforts to kick off this collaboration,” he added without giving any further details.

Australia is already a partner in the US-led Climate and Clean Air Coalition (CACC), and is now seeking to exploit its large shale gas reserves.

The shale gas boom in the US has helped it displace large volumes of coal from its energy mix and reduce its emissions in the process.

Climate change’s effect on food prices during the Arab Spring is one such example identified in recent report by a group of US think tanks.

“The consequences of climate change are stressors that can ignite a volatile mix of underlying causes that erupt into revolution,” Anne-Marie Slaughter, the State Department’s former Director of Policy Planning, wrote in the preface.

Climate change was not on the agenda when Kerry met Foreign Secretary William Hague recently, the pair preferring to focus on the civil war in Syria, but both countries recognise the security risks a warming world present.

The UK’s chief climate envoy Neil Morisetti told RTCC all countries must prepare for ‘climate conflict’, and said the UK and US would work closely together towards a legally binding climate deal in 2015.

“Both Secretary Kerry and President Obama have talked about the importance of addressing climate change – we’ve seen correspondence from large parts of American society for action,” he said.

“There’s a lot going on in America at state, local and regional level – it needs to build momentum now and see action to follow the statements from the key players.”