Africa can go a long way towards lifting itself out of poverty and ending its chronic shortage of energy by using its own resources, a report says.

REFiTs encourage investment in generating renewable energy – by individual home owners and communities as well as institutional investors – by guaranteeing to buy all the electricity produced from renewable sources.

The report is based on analysis of existing and planned REFiT policies in 13 African countries (see end for list). It is the work of the World Future Council and the Heinrich Böll Foundation, with the support of Friends of the Earth UK.

It says that, when tailored to local conditions, REFiT policies successfully increase the overall energy production of areas both on and off the electricity grid.

Their decentralised nature, it says, provides an opportunity to empower communities and to revitalise local democracy and self-governance by allowing for alternative models of ownership and governance. And, of course, they do not cause emissions of harmful greenhouse gases, being based on technologies like wind and solar power.

The authors say REFiTs have helped to increase the use of renewable technologies worldwide, with 65 countries implementing some version of the policy by 2012. 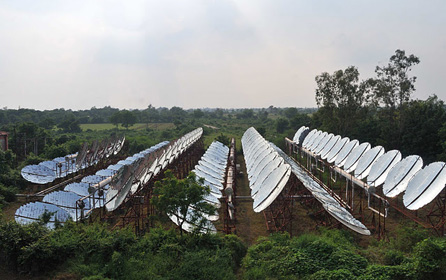 On average about 70% of Africa’s population lacks access to modern and clean forms of energy (Source: IEA 2011)

Most of the installations that have resulted are in industrialised countries, particularly in Europe, but the report says Africa still has significant untapped renewable energy potential.

World Bank research has shown that fewer than 25% of households in sub-Saharan Africa have access to electricity, with the figure falling to 10% in rural areas.

The UN Secretary-General Ban Ki-moon has described renewable energy as “the golden thread that connects economic growth, social equity and a climate and environment that enables the world to thrive”.

Many of the countries examined in the report have low levels of electrification and rural populations which are widely dispersed. But the report says REFiTs can serve decentralised mini-grids, which also encourage greater levels of democratic control and ownership.

Referring to one of the countries featured in the report, Ansgar Kiene, director of the WFC Africa office, said: “Tanzania had already opened its electricity market to independent power producers back in 1992.

“Its experience with mini-grids in particular should be seen as an advantage when it comes to drafting supportive frameworks for accelerated renewable energy production. However, the lack of long-term, low-interest financing has been, and remains, a key challenge.”

The authors acknowledge that broader problems can complicate the adoption of REFiTs. One is the need of developers for access to affordable financing options and to locally available technical expertise.

Governments must balance the need to keep energy prices low with the requirement to offer sufficiently profitable tariff rates to attract private investment.

The report identifies a number of national and international measures that can help to shift financial resources towards renewable energy uptake. These include levies on fossil fuels and contributions from the United Nations’ Green Climate Fund.

It says high-level political support for REFiTs is essential, and urges models of South-South co-operation to overcome obstacles. Civil society coalitions can help to produce policies which will be resilient to political change.

The report urges policy makers to be very clear what it is they really want to achieve, as REFiTs offer more than one benefit. It says subsidies for low-income households are important, and that rich and energy-intensive users of the schemes should cross-subsidise affordable tariffs for the poor.

Kulthoum Omari, sustainable development programme manager of the Heinrich Böll Foundation Southern Africa, said: “REFiTs are most successful when they are an integral part of a country’s wider development strategy.

“High-level political support and strong buy-ins from civil society and the private sector are crucial factors for the successful development and implementation of a REFiT.”