Japan has successfully captured natural gas from deep under the ocean by tapping into methane hydrates, using a new technology that could revolutionize the world’s energy supply.

It is the first country to succeed in exploiting the gas.

The gas supplies locked into methane hydrates are potentially the largest single source of fossil fuels on the planet and for Japan, a country desperate for its own energy supplies, this could be an economic lifeline. The post-Fukushima nuclear shutdown has intensified what was already a difficult situation.

On the other hand, many would regard almost unlimited supplies of a new fossil fuel as bad news in a world where there is already climate change caused by man’s existing excess carbon emissions. 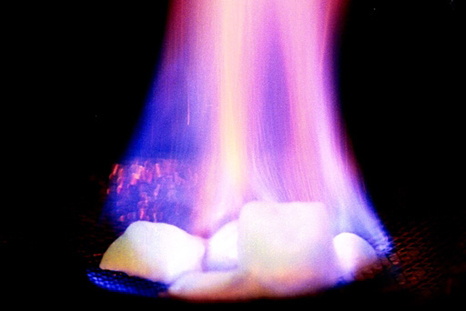 Japan’s resources of ice-like methane hydrate could send it toward energy self sufficiency (Source: USGS)

The announcement of the successful extraction of methane from underneath the sea floor off the Japanese coast came from the country’s Economy, Trade and Industry Ministry (METI).

This is well within economic reach for a pipeline from potential industrial and domestic users in central Japan. The hydrate is basically frozen methane and water, which forms in large lumps under the right temperature and pressure conditions.

The quantity of energy locked away in these formations is enormous. If you melt a one cubic meter block of methane hydrate, about 160 cubic meters of gaseous methane will be released. Potentially, the deposits in the sea around Japan could make a resource-hungry country self-sufficient in energy.

The tests by the state-owned Japan Oil, Gas and Metals National Corporation (JOGMEC) are continuing. It hopes to exploit the technology commercially in a new phase of drilling between 2016 and 2018.

According to the US Oil & Gas Journal, the test well is in 1,000 metres of water off the Atsumi and Shima peninsulas. The hydrate is a further 270 metres below the sea bed in the Nankai trough.

Plenty more where this came from

So far the problem with exploiting the hydrates has been that they become unstable if the pressure or temperature changes. However, it is by reducing the pressure on the deposits in controlled conditions that Japanese technicians have been able to capture the released methane.

According to a Japanese study there are 1.1 trillion cubic metres of methane hydrate around its coasts, equivalent to more than a decade of current Japanese gas consumption. This quantity is dwarfed by the amount in other parts of the world, particularly the Arctic.

The US, Canada and China have all been trying to work out ways of exploiting the potential of hydrates but it is Japan that appears to have come up with a solution.

Environmental groups fear the global warming potential of hydrates. Scientists are already studying the effect of warming oceans and permafrost melting on the large deposits of hydrates on the sea-bed and in the tundra.

Some fear that large releases will worsen the effects of climate change, while others believe the vast majority of deposits will remain stable.

The prospect of drilling into them and possibly releasing methane – a potent greenhouse gas – in an attempt to exploit them for fuel will spark an international debate.