The Russian government has recently endorsed a draft state program for energy efficiency and energy sector development that lists part of the Kyoto Protocol as a major source of funding, months after leaving the UN emissions cutting process.

In what looks like a textbook example of Russia’s climate policy schizophrenia, it has listed a $4.6bn contribution from Joint Implementation (JI), a financial mechanism of the UN’s Kyoto Protocol (KP), which Russia left during the climate talks in Doha last year.

This gem of mismanagement was pointed out at a major expert meeting hosted by Delovaya Rossiya, one of the two largest business lobby groups.

The use of the wording Joint Implementation suggests that some in the Russian Government harboured hopes of remaining in Kyoto for its second commitment period, which started on January 1, 2013. Ultimately they did not bother to update the draft text, which had been in the works for quite some time. 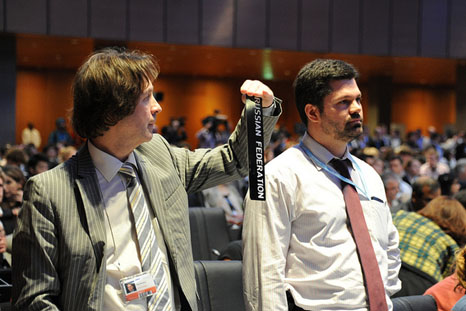 Oleg Shamanov (left) tries to intervene in the approval of the Kyoto Protocol’s second commitment period at the Doha climate talks in 2012 (Source: Flickr/UNFCCC)

After a year of unsuccessful pro-KP lobbying culminating in a spectacular showdown last December, industry and government experts decided to refocus on national carbon market development, but the phantom of that Kyoto opera apparently still haunts some meeting rooms and documents.

According to the draft text of the program in question, JI project revenues are considered one of the sources of private funding needed for the program. It appears that the authors expected to get 137 billion roubles ($4.5 billion dollars) of funding from selling some 340 million tonnes of CO2 annually up to 2020.

The contraction of Russian industrial output and upgrading of its infrastructure means the country has a surplus of carbon emission allowances.

Russia’s special envoy for climate change issues Alexander Bedritsky dismissed the error, saying this was in no way a signal of a change in Russia’s KP stance.

Bedritsky suggested the reference could be about future carbon market mechanisms, both national and regional, including those being developed under the UN climate convention umbrella.

“We should probably ask the authors of this document what exactly they meant by that,” Bedritsky told a smiling audience.

Unsurprisingly, no one from the Russian Ministry of Energy was present at the meeting to respond to the question.

Last year the Ministry was not involved in the Kyoto debate reportedly because its only expert had quit the job and thus it had nothing to say on the matter.

Russia left Kyoto at the Doha climate talks after an amendment to terms of the second commitment period would have forced it to surrender carbon credits from the first phase.

Despite its objections, the changes were gavelled through in Doha.

The threat of a legal challenge remains.