The first salvos of the new UN climate regime have been fired by some of the most influential nations ahead of the first talks in earnest on a global emissions deal.

After early housekeeping was addressed at the UNFCCC’s session in Doha last year, the second meeting of the Ad Hoc Working Group on the Durban Platform for Enhanced Action, known as the ADP, kicks off next month.

Japan, USA and an influential group of developing countries have all submitted input to the process this week with China entering theirs the previous week.

The ADP will seek to find a universal globally binding deal to reduce emissions by 2015 and to be put into force in 2020.

Unlike the Kyoto Protocol, it will apply to rich and poor nations. The issue of how it considers the national circumstances of each of the 194 parties to the talks, is at the centre of the debate. 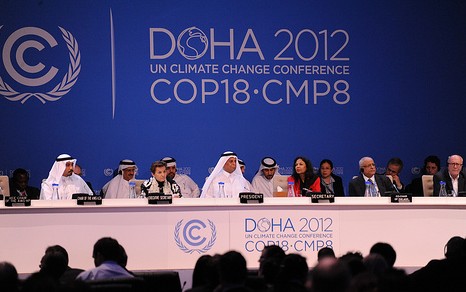 The first talks on the ADP in Doha were largely logistical. (Source: Flickr/UNFCCC)

The US, historically uncomfortable with having regulation dictated from beyond its own borders suggests each country should set its own targets.

“We consider that the agreement should provide for Parties to define their own mitigation contributions, taking into account national circumstances, capacity, and other factors that they consider relevant,” reads the statement.

“Some might consider it counter-intuitive to say that having Parties determine their own contributions will promote ambition — because Parties might, left to their own devices, choose low levels of ambition.”

It goes on to say that this could be avoided by effectively establishing a public review period.

The USA believes that this approach is the best way to ensure maximum participation in any deal.

The Chinese submission repeats many familair views heard during the Doha climate talks.

The country wants developed nations to increase their pledges to reduce greenhouse gas emissions before 2014, regardless of whether they are participating in the Kyoto Protocol or not.

It also wants to ensure that financial, technological and logistical support for developing countries to cut their emissions is in place.

“For post-2020, developed countries shall continue to provide adequate financial resources, mainly from public funds, to support enhanced mitigation and adaptation actions by developing countries, with a clear roadmap for such financing and its ratcheting-up.”

The Green Climate Fund (GCF) will aim provide $100bn a year by 2020 but it is unlikely that the Chinese condition that the majority of money come directly from government budgets, will be met.

This relatively new grouping of nations is led by the Philippines and includes Venezuela, Saudi Arabia and Mali among others.

One European-based climate policy expert has described the grouping as “the dinosaurs” of the developing world that have seen their influence diminished by emerging powers like Brazil.

In a document submitted to the UNFCCC on Wednesday, they reiterate the need for Kyoto participating countries (the EU plus Australia effectively) to increase their pledges.

The group also takes a swipe at the EU’s now suspended efforts to include all flights using its airports in its regional carbon market.

“The agreed outcome of the ADP’s work must ensure that multilateral rules are fully respected and that threat or use of unilateral actions, particularly against developing countries, are permanently removed,” reads the LMG statement.

A global deal is being negotiated at the UN’s International Civil Aviation Organisation (ICAO). The EU has said it will start asking all airlines using its airports to take part in the cap and trade program again, if no agreement is made by the end of the year.