A second carbon price bill has been floated by politicians in the US led by Democrat Henry Waxman.

The new legislation suggests a price of between $15-35 per tonne of CO2 emitted to be applied to oil and gas companies as well as other big emitters such as steel makers, cement factories and landfills.

Last month Senators Barbara Boxer and Bernie Sanders proposed a $20 carbon tax to be applied to coal mines and oil refineries rather than heavy energy users.

Rep. Waxman co-sponsored the doomed Waxman-Markey bill to establish a cap and trade system in the US in 2009. 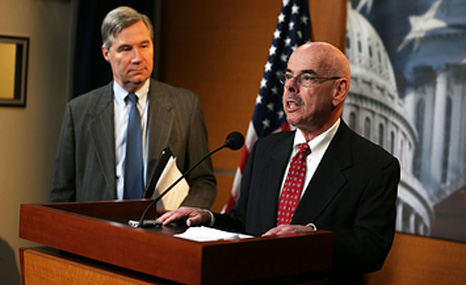 Rep. Waxman (right) has turned to carbon tax legislation after an attempt to establish a US cap and trade scheme bombed in 2009

Both proposals come as President Obama gears up for a more aggressive approach to climate change during his second term.

New Energy Secretary Ernest Moniz is an active proponent of clean energy while the new Secretary of State John Kerry was one of the most vocal supporters of the 2009 Waxman-Markey bill.

Robert Frank, professor of economics and management at Cornell University, argues that any remaining doubt on climate change science should be set aside and climate legislation progressed.

“No one would argue that a country doesn’t need an army just because there’s uncertainty about whether an invasion will occur,” he added.

“Carbon taxation is an affordable step that could eliminate any significant risk of catastrophic climate change. Adopting it would make sense even if we didn’t need additional [tax] revenue. But with tens of millions of additional retirements looming, we obviously do need additional revenue, and a carbon tax would help solve that problem too,” claimed Frank.

Republicans currently control congress and the successful adoption of any new climate change legislation would require their support.

Former White House economist Adele Morris told RTCC that using the revenues of a carbon tax to give concessions to Republicans could be one way to win their support.

“I would use the money to drive down the deficit. They will want more. Why not give the Republicans the Corporation tax cuts they want?” she said.

Morris has recently estimated that a carbon tax could cut the US deficit by $199bn.

Morris says a national cap and trade proposal remains a non-starter in the USA, despite the recent successful launch of a California wide scheme. That leaves a carbon tax as the only remaining market-based option.

Details of the new proposal