NGOs including Oxfam, ActionAid and Friends of the Earth have called for greater access to discussions on the UN’s flagship climate fund as its board prepares to hold its third meeting this week.

The Green Climate Fund (GCF), established at the 2010 UN climate talks in Cancun, has the goal of raising $100bn a year by 2020 to fund climate projects in developing countries.

The last board meeting in October was described as “retrograde” by Karen Orenstein, International Policy Campaigner with Friends of the Earth (FoE) US who said civil society groups felt “like kids begging a teacher to let [them] talk”. 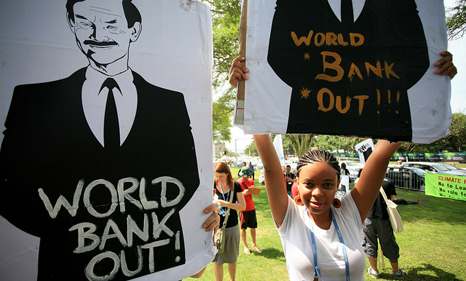 The Green Climate Fund has proved controversial with many uneasy about the role of the private sector and the World Bank (Source: FoE International)

After what amounted to a shut-out at the previous meeting, a group of 73 charities and campaign groups have issued an open letter to the board’s members in the hope of avoiding a repeat in Berlin.

“Civil society has been given very little space to participate in the development of ideas that are being discussed at this meeting,” said Janet Redman, co-director of the Sustainable Energy & Economy Network at the Institute for Policy Studies.

“Decisions taken at the Green Climate Fund board are central to how the needs of climate vulnerable communities will be met, so it is essential that their deliberations are open and transparent,” she added.

“At this point it seems the board wants to limit public participation, access and voice. That’s unacceptable.”

The GCF, which will be based in South Korea once it is fully operational, is still in its formative stages with decisions about how it will raise and distribute money still to be discussed.

The board is made up of government representatives from developed and developing countries and has been criticised for limiting access to observer organisations, failure to webcast sessions and to help fund participation by groups from the Global South.

Brandon Wu, a senior policy analyst with ActionAid told RTCC other complex funds such as the Global Fund to Fight AIDS, Tuberculosis and Malaria (GFATM), were setting an example worth following.

“Robust and meaningful civil society participation – at both the decision making level and the implementation level – is crucial for the success of the GCF,” added Wu.

One of the key issues on the table this week will be how much public versus private money is used to meet the GCF’s obligations.

Many civil society groups are keen to avoid private finance as much as possible fearing that it could lead to developing countries being saddled with loans and the potential for the pursuit of profit to go against the best interests of those in need.

Most donor government’s say a squeeze on public spending and the potential scale of private sector investment make it essential to the GCF’s future.