Climate change is triggering a “greening” of the Arctic with noticeably lusher vegetation found at northern latitudes, a new NASA-funded study has revealed.

The researchers used 30 years of satellite observations and discovered that conditions today, resemble those 4-6 degrees of latitude further south in 1982. That’s around 250-430 miles.

That is the equivalent of London having the same conditions as Lyon in the south of France in 1982.

“Higher northern latitudes are getting warmer, Arctic sea ice and the duration of snow cover are diminishing, the growing season is getting longer and plants are growing more,” said Ranga Myneni of Boston University’s Department of Earth and Environment. 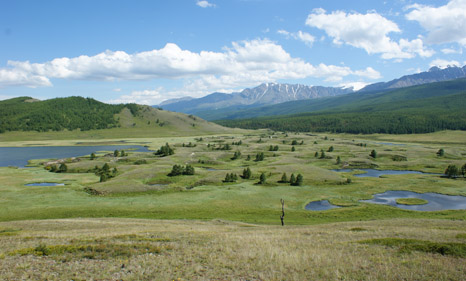 “In the north’s Arctic and boreal areas, the characteristics of the seasons are changing, leading to great disruptions for plants and related ecosystems,” he added.

As the Arctic warms there is reduced sea ice cover. Sea ice ebbs and flows with the seasons but last summer’s melt led to a record low coverage of Arctic sea ice.

Dark oceans absorb more energy than reflective ice, reinforcing the warming in the region, according to Myneni.

This is not the only so-called feedback mechanism at work.

“The greenhouse effect could be further amplified in the future as soils in the north thaw, releasing potentially significant amounts of carbon dioxide and methane,” added Myneni.

Melting permafrost has been identified as a major potential source of future greenhouse gases.

The study, published in Nature Climate Change, estimated that warming and the longer growing season meant that there was productive vegetation across a third of the northern landscape.

Reduced ice levels could open the Arctic up to new shipping lanes as well as encouraging mining and oil and gas exploration.