The oil from Canada’s tar sands is widely regarded as one of the dirtier fuels produced, not least because it takes more energy to extract it.

Canada’s First Nations are anxious to stop the oil being exported to Europe.

A leader of Canada’s Indigenous peoples has arrived in Europe to try to stop the tar sands industry, which he says is “destroying the way of life of First Nations peoples”, from making inroads here.

He is Chief Bill Erasmus, head of the Dene Nation in the Northwest Territories, who has come to Europe ahead of a vote by the European Council later this year which could make the export of oil from the tar sands to Europe more difficult.

The oil, found in clay-like deposits, is widely judged one of the oil industry’s most polluting fuels. 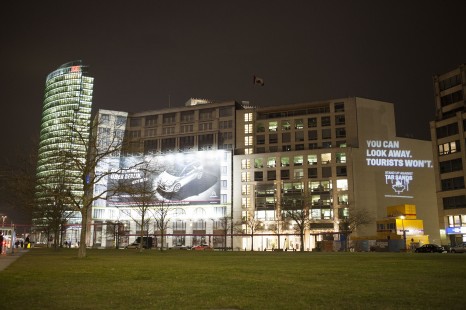 Local environmental activists projected a message on the side of the Canadian Embassy in downtown Berlin (Pic: © www.david-biene.de)

The European Union, in its Fuel Quality Directive, describes tar sands as one of the world’s dirtiest forms of crude oil. Its studies show that mining a barrel of oil from tar sands generates about 20% more emissions than from conventional crudes.

“The extraction of the oil does not recognise our sovereignty over the land as set out in the treaties concluded between our peoples and the British”, he told the Climate News Network.

He said the mining squandered vast amounts of fresh water, needing three times more than the drilling of conventional crudes to heat and cool the sands and to separate the oil. It wasted gases, left lakes of sludgy toxic pollution and released carcinogens into the environment.

If that sounds familiar, perhaps it is – the sort of protest often prompted by conventional mining and drilling of conventional fuels. But Erasmus says it’s more than that.

“The problem is that there’s no plan in Canada”, he says. “There’s no search for new ways of extraction, or for disposing of effluents.

“The Government denies that it’s dirty oil, it says it’s ethical. There’s no discussion with people and no thought of sustainable development.”

What really bothers him is the effect he sees on wildlife. Still hunting and trapping at nearly 60 years of age,  he says animal behaviour is changing – and he thinks the pollution the tar sands industry is causing is partly to blame.

“We’re caribou people”, he explains. “We’re hunting them now. But their migration patterns are changing, and we’re getting a lot more moose, which are starting their rutting earlier.

“There are cougars now from the south, and deer which we’ve never had before. In the last 15 years we’ve been seeing magpies.

“The bears used to stay in their dens till May, but now they’re emerging in March. It’s partly because the climate is changing, and partly because of the way the oil industry and the chemicals it’s using are changing the environment and harming the animals in the food chain.”

Canada withdrew at the end of 2011 from the international treaty designed to tackle climate change, the Kyoto Protocol.

Environment Canada, the Canadian Government’s agency responsible for protecting the environment, set up an Oilsands Advisory Panel, chaired by a former head of the UN’s Environment Programme, Liz Dowdeswell.

The Environment Minister asked the Panel whether or not Canadians had a first-class state-of-the-art monitoring system in place in the oil sands. The Panel’s answer was “no – but…”

The “but” was added because the Panel was “convinced that the current activities could be transformed into a system that will provide credible data for decisions – a system that will allow us to know the current conditions and trends in the oil sands ecosystem and encourage the necessary foresight to prevent a compromised environment.”

But… it submitted its findings to the Minister – A Foundation for the Future: Building an Environmental Monitoring System for the Oil Sands – and added this comment: “…as a final note, our site visits had an indelible impact. It is hard to forget the sheer extent of landscape disruption, the coke piles and the ubiquitous dust.”

RTCC VIDEO: Tom Goldtooth of the Indigenous Environment Network labels tar sands exploration in Canada the ‘worst single example of polluting’ he has ever witnessed


This article was produced by the Climate News Network