Figueres: time for women to shine in climate challenge

The world must transition to a low-carbon growth model to meet the climate challenge.

This paradigm shift can only take place if women, half of the world’s population, are fully empowered to contribute to the solution.

The issue of gender in climate change may sound general, but it represents repeated, heartbreaking experiences and observations— from development to disaster management around the globe.

Particularly in developing countries, women are disproportionately impacted by climate change, as they stand at the core of the water, food and energy nexus.

In addition, due to continuing gender imbalances, women are likely to be worse affected by natural disasters. For instance, a recent report found that women accounted for 80% of fatalities from the Asian tsunami in 2004. 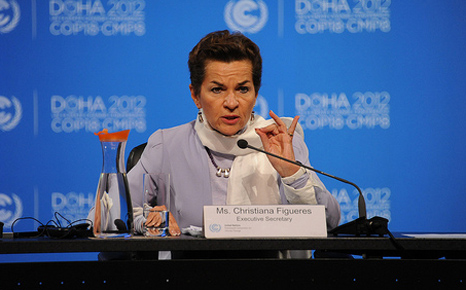 The UNFCCC’s Momentum for Change: Women for Results project is supported by the Rockefeller Foundation (Pic: UNFCCC)

On the other side of the ledger, I believe that the international development community has already started to come together in recognizing women not just as victims, but as vital actors in tackling the climate challenge.

This decision is expected to advance gender balance in the negotiations in several ways:

– It adds the issue of gender and climate change as a standing item on the agenda at future United Nations Climate Change Conferences, including an in-session workshop at the next conference in Warsaw, Poland in November 2013.

– It calls for gender responsive policies at both the international and national levels.

I am convinced about the need to shine a light on gender-responsive solutions to climate change taking place on the ground and demonstrating significant results.

With this in mind, the United Nations Climate Change secretariat launched Momentum for Change: Women for Results.

This initiative recognizes the critical leadership and participation of women in addressing climate change.

It is seeking inspiring examples of activities from around the world that demonstrate measurable impact on the ground and potential for scalability and transformational change.

For example, Solar Sister a project in Africa that is part of the clean energy revolution and empowers women entrepreneurs in a direct sales network is a concrete example of the type of activity that we want to showcase with Momentum for Change.

Solar Sister uses a micro-consignment model, which allows women to sell solar lighting and phone charging equipment to others in their community.

The results of this activity positively impact the private sector by giving women more buying power, allowing the community to save money on kerosene fuel typically used to light homes, and providing a health benefit of cleaner indoor air, and reducing the burning of fossil fuels for much needed household energy.

Solar Sister is just one example of women helping to bridge the gap between need and response and establishing a low-carbon growth model as the new normal.

I hope that by showcasing these projects on the international stage, we can inspire action across the globe, increase equality and encourage women to speak up.

This article first appeared on the Rockefeller Foundation website.