Coal fired power plants in Europe should be banned by 2040 as their emissions cause high levels of sickness, health campaigners have warned.

The Health and Environment Alliance (HEAL) says the pollutants from burning coal cost the EU €43 billion a year.

The elderly and the young are at particular risk, with lung damage sustained in childhood reducing the chances of achieving maximum lung function in adult life. The pollution also increase the risk of blood clots and strokes.

Significantly, it has found that the effects of the pollution which coal incineration causes are not confined to people living close to power stations, but can affect entire populations in varying degrees.

“As 2013 is the European Year of Air where a review of EU air quality policy will take place, this is the right time to act.” 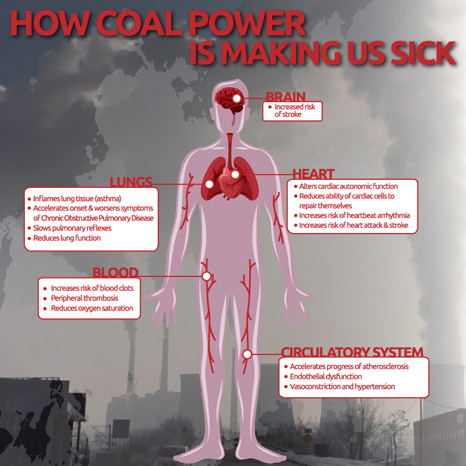 The EU has a number of air pollution regulations as well as targets to reduce greenhouse gas emissions 20% by 2020.

“The EU has committed to protect public health from air pollution as well as from climate change impacts,” said Dr Peter Liese, a German MEP.

“As the use of coal in Europe is currently increasing, there is a significant threat to people’s health in the short and long term.”

Rising gas prices and falling coal prices led to a recent spike in EU coal use.

Domestic regulation in the UK to clean up or close coal power stations will come into force next month and many operators have sought to squeeze out extra capacity from those facilities before they shut.

In Germany, the decision to close down all its nuclear power plants by 2022 has seen coal fill the void in the short term.