Bangladesh, India, Indonesia, Viet Nam and China are all rated at ‘high-risk’ to multiple devastating hazards.

Mega cities built on flood plains and low lying coastal regions such as Shanghai or Dhaka are identified as particular concerns.

Scientists predict an increase in extreme weather events and rising sea levels as a result of man-made climate change.

“With the increasing global economic importance of these nations and their interconnectivity to global markets, a major event in one these financial centres increases the risk of economic contagion,” said Helen Hodge, Head of Maps and Indices at Maplecroft.

“In particular, a limited resilience capacity to ‘bounce-back’ from disasters will amplify this risk and prolong economic down-time.” 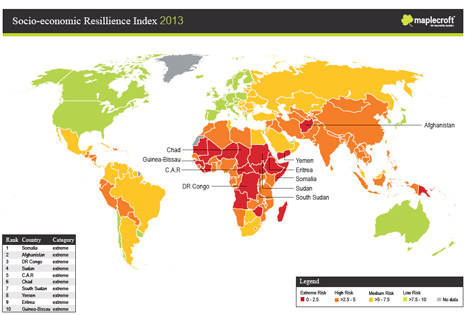 And despite a series of severe storms hitting the USA, Caribbean, Philippines and Pacific Islands, 2012 was the least deadly year in the last 10 years.

Maplecroft contend this was due largely to the lack of major events outside high-income countries with the infrastructure and resources to withstand their socio-economic impacts.

Superstorm Sandy, in spite of its strength and size, killed only 110 people in the United States, due largely to the country’s highly sophisticated response and well developed infrastructure and communications networks.

In contrast, the deadliest event of 2012, Typhoon Bopha in the Philippines, resulted in over 1,000 deaths even though fewer people were exposed to the storm’s path as it swept across Manila and the surrounding region.

Fatalities from natural hazards stood at 9% of the yearly average of 106,000 from the previous decade, while recorded natural disasters also saw a significant fall to 251 events, constituting a 65% drop on the 10 year average of 380.

According to Maplecroft, the relatively quiet year may lead to complacency in relation to risk preparedness in some of the most exposed countries.

Socio-economic resilience to the impacts of natural disasters was also scrutinised this year, with the report finding Africa hosts 19 of the 23 ‘extreme risk’ countries in the index.

Many of these economies are, however, resource rich mineral producers where investments will be highly exposed should a disaster occur.