Energy shortages are depriving an estimated one billion people from access to healthcare, according to a report by NGO Practical Action.

In India 46% of health facilities, serving an estimated 580 million people, are without electricity.

In sub-Saharan Africa more than 30% of health facilities, serving an estimated 255 million people, are without electricity.

Facilities without electric lighting have to depend on paraffin lamps, candles or torches that provide low-quality light, give off harmful fumes, and in some cases present a fire hazard. 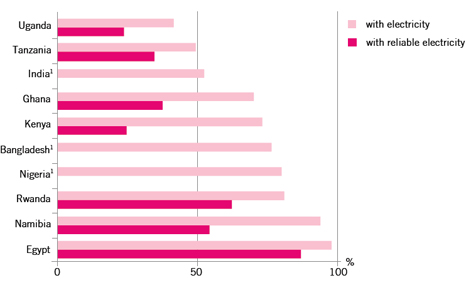 The report reveals in the same period the number of facilities with incubators for newborn babies increased from 38 to 62, and the probability of the baby dying in the first 28 days after birth dropped from 40 to 28 per 1000 births.

The study highlights the twin challenges of vastly increasing electricity provision around the world while cutting global greenhouse gas emissions.

It also warns that current levels of annual investment are US$39 billion less than what the International Energy Agency says is needed to achieve universal access by 2030.

Launched in 2012, UN Secretary General Ban Ki-moon’s Sustainable Energy for All (SE4ALL) initiative set a target of providing universal access to energy, doubling the share of renewables and doubling energy efficiency standards by 2030.

Practical Action say this can only be achieved if national plans and the portfolios of donors, multilaterals and the private sector “embrace appropriate decentralized solutions” such as mini- and off-grid networks.

It also recommends SE4ALL focuses on the provision of low-power technologies, such as solar home systems and solar lanterns, as well as encouraging financial conditions where smaller renewable energy projects can borrow money at low interest rates.