China is to impose emission caps on six major polluting industries, the government has announced.

The Ministry of Environment said on Tuesday that limits on pollutants for coal fired power stations and steel works would be limited in 47 different cities.

The policy will initially be introduced in city centres in 2015 before being extended to the entire area by 2020, according to state news agency Xinhua.

The Beijing-Tianjin-Hebei cluster, Yangtze River Delta and the Pearl River Delta are among the sprawling urban areas to be targeted. 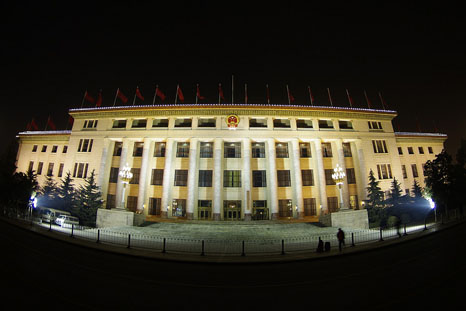 The Great Hall of the People in Beijing where outgoing Premier Wen Jiabao has stressed the importance of low carbon development (Source: Flickr/INABA Tomoaki)

Many of China’s largest cities, and in particular Beijing, have suffered from extreme pollution in recent months.

Business leaders have joined public calls for more action on the Beijing smog earlier this year.

The Chinese government has publicly discussed the need to do more on air pollution. Tackling air pollutants such as black carbon could prove to be a more popular than regulating greenhouse gas emissions.

Actions to reduce pollutants such as black carbon, typically reduce CO2 at the same time.

“We should adhere to the basic state policy of conserving resources and protecting the environment and endeavour to promote green, circular, and low-carbon development,” he told 3000 officials in the Great Hall of the People in central Beijing.