Divisions over plans to develop a global climate deal by 2015 appear as wide as ever after two influential groups of developing nations accused rich countries of undermining negotiations.

Their targets appear to be European Union attempts to enforce an aviation emissions scheme, and a USA-led project to cut levels of potent greenhouse gases from the atmosphere.

The Like Minded Group (LMG) released a statement over the weekend rejecting ‘unilateral measures taken by some parties’ and demanding greater mitigation pledges under the UN climate convention.

This followed a similar pronouncement from the BASIC bloc of China, India, South Africa and Brazil opposing ‘any unilateral measures’ and warning against attempts to ‘renegotiate the convention’. 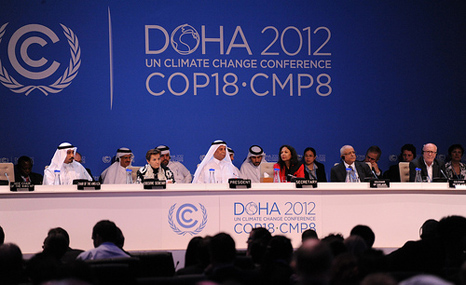 But he warned against any demands on developing nations that ignored the historic responsibility of developed nations to take the lead in addressing climate change.

“We anticipate a massive effort to undermine the principles of the Convention, and we reiterate what we have articulated before,” he said.

“If there’s any intention to renegotiate or rewrite the Convention, then we would like to know who subscribes to such an intention.

“If there’s no such intention, then we can proceed with such an understanding that we are not going to renegotiate any principle nor any provision of the Convention, including its Annexes.”

The Like Minded Group (LMG), which counts China, Venezuela, Saudi Arabia and the Philippines among its membership, also stressed the importance of developing the climate compensation or loss and damage mechanism that was agreed in Doha.

One analyst who declined to be named told RTCC that efforts to include it in negotiations on a 2015 deal would be resisted by the Global North and could result “in conflict”.

US and EU efforts to address climate change outside the climate convention have been greeted with suspicion by some observers.

A main concern is that the US-led Climate and Clean Air Coalition and the EU’s aviation emissions scheme ignore the climate convention’s principle that richer nations should take the lead in cutting emissions.

The LMG statement contends that the: ‘avoidance of such measures is a key principle to safeguard multilateralism and advance the work of the ADP [Durban Platform]’.

BASIC rejected ‘the unilateral approach of EU under the EU-ETS and reiterated the importance of adhering to multilateralism’.

The last round of UN sponsored climate talks ended in emphatic fashion, with summit President Al Attiyah gavelling through a series of agreements in record time.

Critically he approved an extension to the Kyoto Protocol and formally closed a track of negotiations known as the LCA (Long-term Cooperative Action), which focused on how countries could work together to achieve climate goals.

These conferences are notoriously difficult to manage and frequently run over time, so many were delighted with this approach.

But it appears increasingly clear that while it enabled the conference to conclude in a neat fashion, it may have further confused matters in the longer term.

Russia is still furious that its delegate’s objections to the form of a Kyoto Protocol extension were ignored by Al Attiyah.

The lack of a coherent strategy for filling the Green Climate Fund was ignored in Doha, ambiguous language replacing crisp banknotes. Scheduled to open in 2014, it is currently a bank with no cash.

Meanwhile, Sano suggests that the conditions under which developing nations agreed to streamline the UN negotiations and focus on a 2015 deal have still not been met.

In addition to finance, these include the need for developed countries to take the lead due to their historic responsibility, the importance of implementing existing decisions and the principle of equity.

“On the contrary, the work under KP and LCA are essential preconditions for further work on any issue under ADP.

“Now we dare ask, have we met these essential preconditions? Have Parties fulfilled the mutual reassurances? I believe not.”